If there’s a month that will stand out from the rest of the year in terms of what I’ve learned on my Urban Farm Handbook challenge, I’d have to say it’s August, which was preserving month. My preserving experience is chugging along into September, and I thought you might like an update on how my adventure is going (more UFH challenge updates are here). 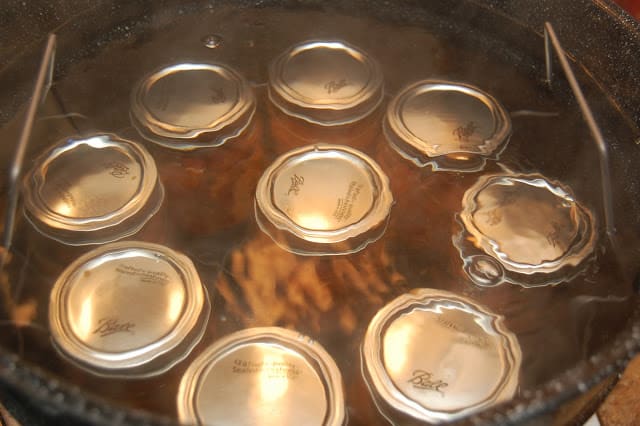 I grabbed ten pounds of tomatoes from Verrill Farm while we were out in Sudbury one day last week, and they were delicious. At $2.99/lb., they weren’t the most frugal bunch to use for canning; I would have been better of to select the giant crate of “seconds” tomatoes I saw the following week for $20. However, I was too excited to embark on my first canning project to postpone any longer. 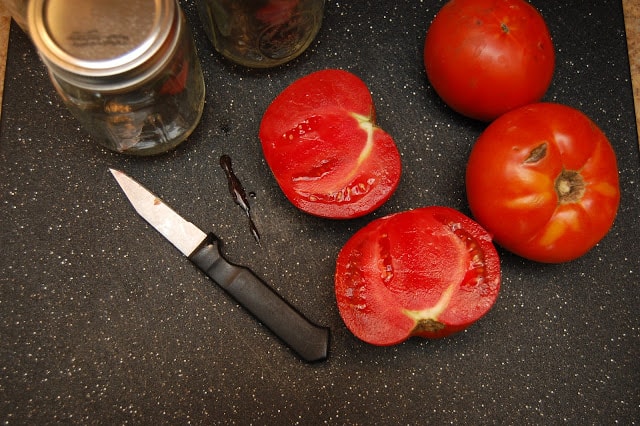 I decided simply canning tomatoes straight up wasn’t quite exciting enough so opted to make fire roasted diced tomatoes first. It turns out that wasn’t such a bright idea for a first project either: borrrring. Peeling and chopping tomatoes for a few hours, only to result in something I can’t eat alone, was not my idea of a good time. Plus, after eating a few raw tomatoes and canning the rest, I only ended up with three pints, which is also not my idea of time well spent.

Rather than allow myself to be deterred so easily, I decided the next day to try again. This time I wanted to make something I could eat, and more importantly, that my husband loves. For what is the point of all this from-scratch cooking if not to gain the affections of one’s spouse, amiriteladies? I knew just what I would make.

Salsa! One of the draws to us becoming a marital couple is our love of salsa, but it can be tough to find good salsa. Sure, we’ll settle for Newman’s Own if we must, but nothing compares to an authentic bowl they set in front of you at a good Mexican restaurant. I especially love it when they serve salsa warm with fresh tortillas. I’m happy to say this salsa turned out spot-on delicious. To make my efforts worth it, I made a double batch and wound up with NINE pints!

I daresay the most satisfying element this time was the chopping I found so tiresome the first time around. But with salsa, you get to chop such a variety of veggies, and you end up with a delightfully colorful, fiesta-smelling pot. What’s not to love? I started the project when Charlotte was napping and Genevieve was out at a soccer class with her dad, and I relished the few moments I had to myself to chop veggies and listen to music. 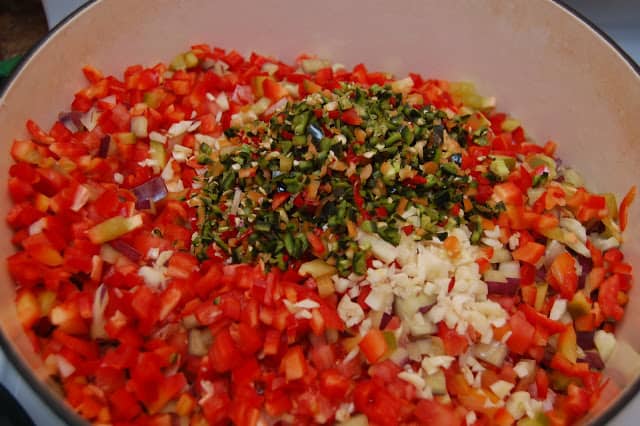 My top two resources are Local Kitchen and the new Food in Jars book I picked up recently. I have learned so much from these gals in a few short weeks. For example, did you know you’re supposed to take the rings off jars before storing them? Something about rust and moisture. Anyway, one thing I’ve learned from them that I didn’t at first think was true is that canning becomes second nature. It’s daunting at first, but once you get over the hump, it is quite satisfying to the part of me that longs to return to my great grandmother’s time.

Bartering is the September challenge, which must be the hardest for me of any of them so far. Joining a co-op in which I would be required to contribute my own homemade items seems premature given I haven’t even tried the fruits of my canning labor yet or finished a single knitting project. I’m going to have to lump this lot into the “next year” pile.

Since we’ve joined a meat CSA, I feel fairly versed in the topic of real food as it concerns meat. However, I was pleased to see that in part of October’s upcoming “protein month,” we’ll learn about backyard chickens, a topic I’ve yet to delve into myself but one I’ve had a few guests posts on in the past (from a mom and a farmer).

Editor’s note: FYI, I have given up participating in the Get Real Food challenge. Much of the information shared is, happily, information I already know. I appreciate the value of being among virtual friends, though, so I continue to read along as I can.