One thing you should know about me is that I love chicken ‘n’ dumplings.

And I knew it was time to make a batch when the girls spent a day looking like they do in the picture above. They had a nasty cold all week.****
Before I get more into my love of dumplings, I’ll share a brief story from a recent tot class. [Aside within an aside: when they call a class “jiggle and jive” and then make the moms jump around a lot, are they trying to inspire us to go to the gym more?] We were singing a song, and I had that experience that happens to me so frequently up here where I get lyrics to simple children’s songs wrong. Apparently there are often regional differences in the words, which I never knew until having my own littles. It’s an interesting experience to slip and slide through conversations with locals, knowing you might mess up even the most basic of childhood rhymes. Playing eenie meanie with Vivi the other day, she says, “That’s now how it ends, Mommy! You’re supposed to say ‘Out goes Y-O-U.'” Or else I might stop singing “Ring Around the Rosie” after one verse, and everyone else continues a second verse that includes words like “buttahcups” and “thundah.”

This time it happened, though, I walked away thinking the adapted New England lyrics to, “She’ll be coming around the mountain” are really missing out. They replaced “We’ll have some cake and ice cream,” instead of “We’ll have some chicken ‘n dumplings,” and I simply will not stand for such a variation without attempting to rectify the situation.

****
I love Cracker Barrel. Because I can’t untangle their food from my happy childhood memories–of stopping there to eat with my grandparents on our way to Birmingham to visit my cousins, of selecting paper strips of candy to buy, of playing checkers and that weird golf-tee ig-nor-a-moose game, whatever it was called–I know my love is potentially blind. But I don’t care; I will go on with my positive view of Cracker Barrel, no matter any evidence to the contrary that comes my way.

Whatever you say about Cracker Barrel’s food, you’ll probably appreciate their chicken ‘n dumplings if you give ’em a try. Some people prefer dumplings to be giant matzo-like puffy orbs, but I come from the school of thought in which dumplings are flat rectangles of dense dough. That’s why I call this recipe “Cracker Barrel chicken ‘n dumplings,” although it’s only authentic in that it mostly tastes like their version to me. {Note: I added an alternative way of making puffy-orb dumplings at the bottom of the recipe because I know some people like eating them the wrong other way}.

There are faster ways to cook chicken ‘n dumplings than this recipe. 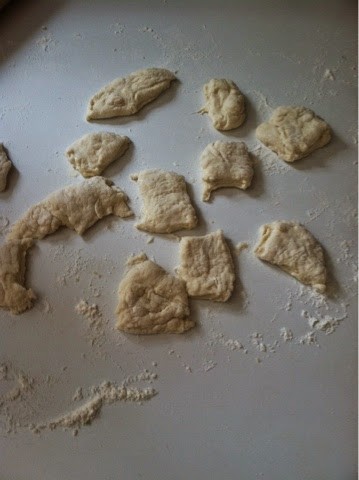 If you want a real shortcut, you can do the 10-minute car-camping version: Put a drained can of chicken, a 15 oz. can of chicken stock, and a little water/flour slurry in a pot; let it come to a boil, drop in cut-up biscuit dough from a can, wait 5 minutes; et voila, dinner is served.

Or you could do the middle-of-the road 30-min approach: Dredge 6-8 chicken thighs and drumsticks in flour. Saute in oil in a Dutch oven until brown. Submerge with chicken stock (2-3 cups), cover, and simmer for 15 minutes. Meanwhile, prepare 1 c. of Bisquick according to package directions, drop tablespoons of dough into stew (on top of the meat), adding more stock as desired, and cook 10 minutes uncovered, then cover and cook 10 more minutes.

But I find that even going all-the-way from scratch isn’t time-consuming or difficult prep. The part that takes up the most time is cooking the chicken to make chicken stock. Whether you want to roast your chicken first to add a depth of flavor to the finished dish is up to you. If you’re pressed for time or simply feeling lazy like I often am, you can just start with raw chicken in the pot. The only thing that changes is your cooking time.

I usually divide the task into two days. On the first day, I cook, cool, and shred the chicken (using the same method described in my chicken & rice soup post), then put it back in the stock and into the fridge overnight to marry flavors.  On the second day, I heat up the soup, add a slurry, season to taste, and cook the dumplings. If you want your kids to get some extra veggies, drop in frozen peas at the very end. 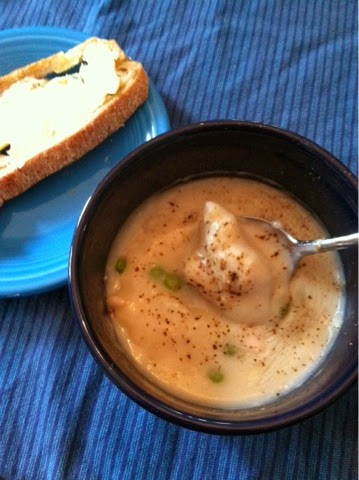