“At my age, you think you’ve seen it all. Then boom! Somethin’ else happens.” -Burt, Raising Hope 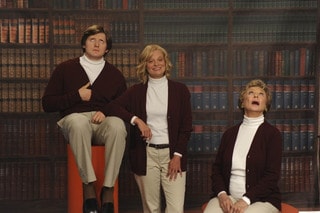 Remember how we got rid of cable last week? Yeah, well apparently that doesn’t mean we stop watching TV. That 9-10pm hour draws me to the couch like an undertow, and most nights I’m too brain-dead to read my shiny stack of library books. Instead, we’ve discovered a new show to stream on Netflix, marathon-style: Raising Hope! It took us so long to get on board, despite the literally dozens of friends who told us we should. In case you’re also one of those people who can only add so many TV shows to the repertoire at once, let me just say that this one should move up a few notches on your stand-by list.

I haven’t done a Top 5 list in a while, so I thought it was about time to share some of the TV shows we’ve gotten into in the last year or so (note to self: this kind of fluff post is what happens when you decide to blog every day):

I give honorable mention to Portlandia; it very nearly tied with The Walking Dead for fifth place. If you can’t stomach flesh-eating zombies (I can’t and still go running out of the room when zombies appear, which is thankfully less often now on the show), stick Portlandia in the fifth slot instead. It’s funny but also just about the weirdest show I’ve ever seen; think Kids in the Hall meets SNL meets anything by Christopher Guest.

General pop culture praise says that we should also be watching Downton Abbey (season 1 currently has 240 holds at the library), Mad Men, Friday Night Lights, and The Wire. We gave The Wire a good long try but got turned off in the second season of incessant boring dockworker stories. Perhaps we’ll give it another try. What’s on your list?

Editor’s Note: This post is part of Friday Fives