Beantown has been all aflutter for the last month. You see, we haven’t gotten much snow yet. There was some aggravating snow back in October when the leaf-and-snow-laden trees cracked under the weight and caused lots of damage, but we hadn’t had the winter wonderland, fluffy, puffy, flitty, giddy, perfect snow. Until yesterday.

Saturday is the absolute best day for it to snow. It started snowing Friday night, which is even better, now that I think about it, because you wake up with snow already on the ground. Coming from my childhood in the ATL, I still get excited when I see snow out the window. It hovered at 15 deg F all morning, so it was the beautiful, tiny, sticks-to-nothing snow us southerners ain’t never seen a’fore. Well, Nate and I did experience it in Wisconsin, but that fact ruins my hackneyed, deep-fried joke.

I can’t believe those pictures are from nearly 10 years ago! Yesterday was Charlotte’s first time walking in the snow, and she got a kick out of it. I’m not positive whether she was more fond of the six inches of fluffy snow or the pretty pink pom-poms on her snow boots. 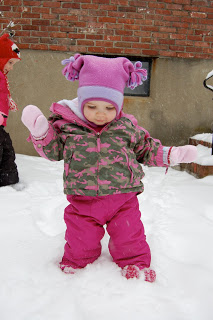 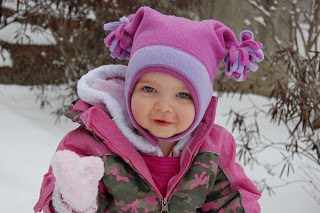 I’m linking up to Steppin’ Out Saturday, so I’ll let you in on the secret to Charlie’s winter weather attire: Old Navy, baby. Except the mittens, those are Columbia via TJ Maxx. The snow bib was a rare brand spankin’ new purchase in September (which is apparently when you purchase such things in Beantown; wait until January like we did last year, and you end up with an ugly black bib two sizes too big. See below). The remaining articles (pom-pom boots, pom-pom hat, jacket) were thrifted at my favorite local shop. You know, the place with the nutty mom. Nate’s not fond of the pink camou, but I kinda like that she looks like a miniature deer hunter.

Vivi is already an old hat at the snow thing, so as soon as she stepped foot in it, and I mean it when I say the girl hadn’t even laid a hand on it yet, she announced “This isn’t snowman snow, Mommy.” That’s my girl. Err, well, maybe some northerner’s girl. 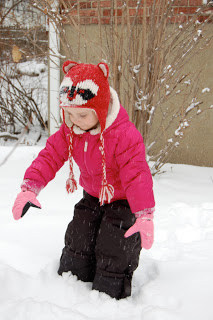 No matter, I had an excellent time with whoever’s kid that was in my front yard. She made snow angel after snow angel, grinning the whole time. I never quite caught her snow-angel-making-face on camera, but it was a hilarious combination of my famous sticky-out-tongue action and a scrunchy thinking face. This is the best shot of it I got: 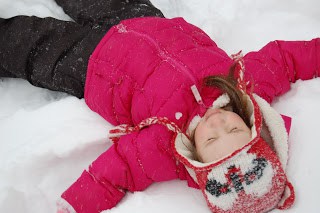 I entered this photo in Paper Mama’s Favorite Photo of January challenge.

Poor Daddy had to watch the fun from inside, since his broken leg is still in a robo-boot. After lots of snow angel making, snow fights, trail blazing, and the world’s shortest game of hide-n-seek (“I see you! Now it’s my turn to hide.” 10 seconds later… “I see you!”), we headed inside for Charlie’s nap. Then Vivi and I made pizza, which is something Vivi has been wanting to do ever since she made it at school recently. She gave me pointers along the way:

“Don’t push too hard with the rolling pin, Mommy, or you will rip a hole in the dough.”

“Just pick up small handfuls of cheese, Mommy, or you’ll spill it.”

“You should do the part with the sauce because I will make a mess. No! Not like that! Get a spoon.” 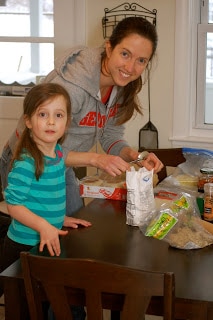 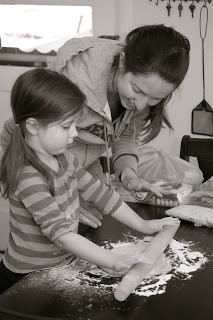 As for the Bostonians with their panties in a wad, I knew we’d get snow all along. According to the folks at NPR this morning, the last time Boston went a winter without snow was 1997, and they complained the whole season. They ended up having a huge snow storm (complete with green lightning!) on April Fool’s Day. Cue Nelson.

Yours in keepin’ it real,
~J 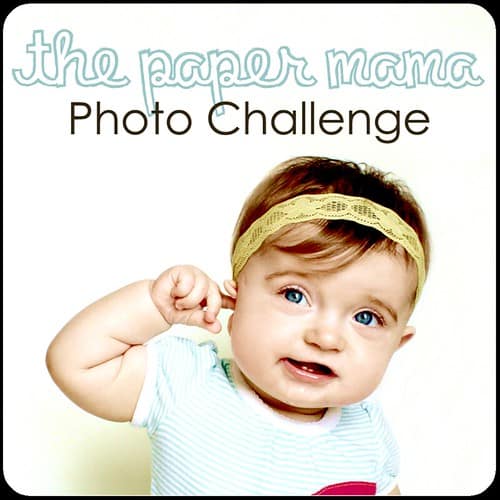