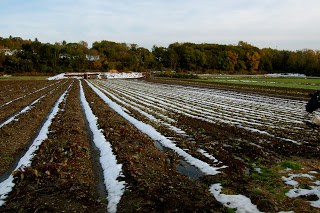 It’s farm week around my house. It started with Halloween, then we had our farmer’s lunch yesterday. I’ve also been spending time this week wrangling my few left-over brain cells so I can learn more about the farming legislation coming up for Congressional Super Committee vote soon.

Before I get going, I’ll admit that this post is a bit of a doozy. But just like with my love of pretzel M&Ms, you can stop at any time. I tried to put in as much information as I could for those who wanted to know a lot, and I hope the most salient details are at the top for those who are in a hurry or frankly have other issues on their mind and would rather learn from Gwyneth Paltrow how to do your own makeup

As we all know, Congress has been tasked with finding a way to cut $1.5 trillion from government programs, for realsies. I’m a frugal chick, so this challenge appeals to me. Right up until the lobbyists with deep pockets enter the room. Then my ass starts to twitch because I know that without concerned citizens like you and me stepping forward, money will change hands, and farm subsidies will continue on as usual.

I wish more people were focused on the farm bill. Although it’s admittedly not a glamorous topic, food production affects everyone, and the real tragedy is that it doesn’t affect you in such a simple, direct way as a tax increase, so no one seems to care. [For the kids reading this post years down the road: There is more in the news this week about Kim Kardashian’s divorce than about the farm bill. I sincerely hope you have no idea who that person is.]

It’s not that I don’t entirely understand why no one cares. Let’s be honest, folks. This is a boring bill. And at 684 pages, it’s a long bill. But–BUT!–I highly recommend taking ten minutes out of your day to watch a TED video in which the Environmental Working Group chairman finds a way to make the topic more intriguing. [Incidentally, do you know about TED? Pretty sweet. Worth a lookie loo.]

Don’t have time? Can’t watch that video because you’re at work? I’ll do a summary for you, quick-like. The breakdown goes like this: the majority of the funds ($300+ billion) go to food stamps, another $60+ billion goes to subsidies for the big five (corn, soybeans, wheat, rice, and cotton), $30ish billion goes to conservation, and $15 billion goes to everything else.

Time out for a minute. If you don’t know much about how subsidies have gone awry, I encourage you to educate yourself. There is a wealth of information in books like “Fast Food Nation” and “The Omnivore’s Dilemma.” But for the Cliff’s Notes version, EWG and Heritage Foundation are good places to start.

Ok, back to the EWG video breakdown. Let’s talk for a sec about food stamps. Over half of the people covered by the stamps are children, and the coverage is only $4.50 per day, so it’s not like we’re talking about people rolling in hundred dollar bills and eating steaks. More like rolling in pennies and eating bread and milk, if they are lucky. If you know about subsidies and about the food stamp program, and you’re not getting paid by either one, it’s a no-brainer. Subsidies have got to go.

Still with me? Want to know more? Check out Harvest Public Media’s farm bill series. I also liked Oxfam’s reasons why both the Tea Party and #OWS won’t like it that the farm bill might be passed without floor debate; here’s an even better Oxfam post, this time by a farmer. The glimmer of hope in the current farm bill news is the Local Farms, Food, and Jobs Act, which has been introduced as a part of the bill to assist the sustainable production of food by local farmers.

Coming from a public health background, much of my interest in food production comes from a nutrition perspective. Now that I have my own kids, I’ve also got a stake in the game as a parent. Since we’re coming ’round the bed to having a kindergartner (less than 2 years to go!), lately I’m zeroing in on the sad state of the American school lunch.

Jamie Oliver’s Food Revolution has kicked my butt in gear to become knowledgeable on public school lunches, and I hope to become part of the grassroots effort to improve lunches at my community level. I’ll see you back here with more on school lunches soon.