If I had to rank the meals I ate “whilst” living in the UK that I miss the most, the list would be relatively short. The British are not, in fact, known for their cuisine. Quite the opposite, actually. However, there are a few meals Nate and I remember fondly and would love to have again.

Many of these meals are not feasible to make at home, like bangers and mash or fish and chips. It just wouldn’t be the same, you know? Top of the list for me is “cream tea,” which is clotted cream (consistency of whipped cream cheese, tastes like cream) with biscuits or scones and jam, and a pot of tea. Yummmmmm.

One meal I can make at home is a ploughman’s lunch. I ate many a ploughman’s with a glass of Strongbow or Magners cider in pubs around the UK. It’s a simple meal, basically consisting of a cold appetizer platter, which is traditionally served as crusty bread and butter, cheddar cheese, apple slices, pickles, ham, and salad greens with no dressing. Since we almost never buy ham, and crusty bread doesn’t last long in our house, I typically substitute crackers and either salami or a boiled egg. [Apologies for the state of the apple pictured; I was planning to slice it but a starving little chipmunk got to it before I could]. 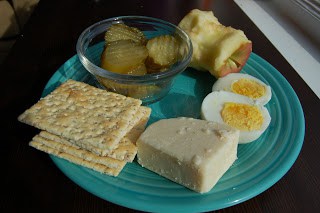 Most days we eat lunch in the kitchen, but on the rare occasion Charlie goes down for a nap before Vivi and I eat, we like to move our party to the living room rug for a carpet picnic (or to the back yard on days when it’s not so…Bostony…outside). 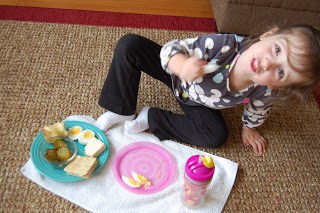 Sometimes I’ll even–the joy!–check my email or flip through a magazine. Eating in peace and quiet in this way makes me realize how sweetly simple, but at the same time utterly incomplete, my life would be with just one child. Do people with three children feel this way about me?