So I go and get all obsessed with farming, and a week goes by, and my family begins sending me the “WTF??” messages, and I finally get motivated to post about our weekend of fun with the men in my family. Despite 32 hours total of driving for them and an unexpected snow storm, we had a great time! Oh, you want more details? Well alrighty then, here we go.

On Saturday morning, I woke up with a small ache in my right trapezoid area. You know that part of the neck that everyone is always wincing and rubbing in those Bengay commercials? It was that area. The ache quickly developed into “I can’t move my neck,” which sent me into an inner spiraling pre-birthday depression. Why does it seem that in my thirties something falls apart on me right around the time I’m another year older? So yeah, anyway, that happened. I’m totally fine. No debilitating injury, just a little pain followed by a lot of whining.

Bright and early, we met the Hair guys (Dad, Grandaddy, and brother Billy) on the Lexington battle green with a Halloween parade. Then we caught the Liberty Ride trolley bus with a tour guide aboard who took us on a great driving tour of Lexington and Concord and told us amazing facts about the Revolutionary War. I’m a visual learner, so to me this is the best way to learn history. Plus, due to the chilly weather, toddlers in tow, and amount of distance to cover, we saw a tremendous amount more than if we had been on foot. 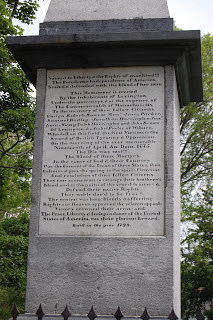 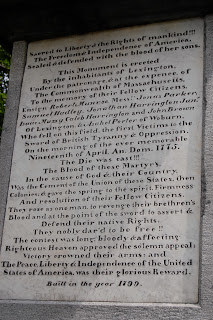 After the tour, we gathered back at home to warm up, catch some GA/FL football, and eat pizza. 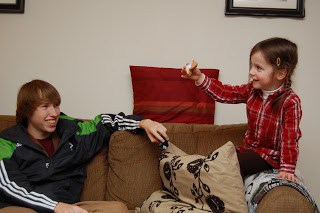 Billy has deposed my dad as king of the Hair men in Vivi’s eyes and is her new favorite person in the world. A deserved rank, I might add, as he played with her for six hours straight while the rest of us lounged on couches and called the dawgs. As evening came around, they retreated to the hotel, and we put the tuckered out kids to bed.

Saturday night we had an unreasonable unseasonable snow fall of six wet inches, which stuck to every leaf on every oak. At about 10 o’clock at night, we started hearing huge cracking sounds and made haste for the front porch. Every neighbor around did the same. We all stood motionless in dumb awe on our stoops watching the branches snap, crackle, and pop around us until one of our neighbors–the quiet one, I might add–yelled “F**K!” and turned around to go back inside. Glancing at each other, Nate and I nodded in silent agreement with his simple analysis of the situation and went back inside to wait for the power to go out. There was a huge branch sitting on our power line by then, so we figured it was just a matter of time.

Candles, flashlights, and camping lantern at the ready, we spent a few uneasy hours holding our breath until we finally grew exhausted and retired to bed, assuming we’d wake up if something bad happened. Thankfully, we somehow have averted the disaster of a power outage and are still, a week later, waiting for the power company to move the branch and repair the line.

On Sunday morning, my dad drove Billy down to see his girlfriend in Rhode Island, and then when he returned we made haste to Boston to see the USS Constitution in the Charlestown Navy Yard. Unfortunately they weren’t giving guided tours that day, but they allowed us to stroll aimlessly about the cabins and deck and take pictures. It was beautiful! After several strange questions about finding a seat, we finally figured out that Vivi was very confused; she assumed we had climbed aboard this ship to go somewhere and was growing restless at our seeming stupidity about finding a seat and buckling in for the journey. 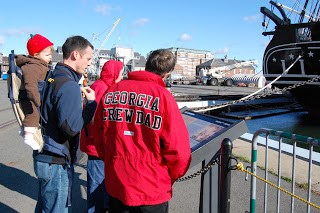 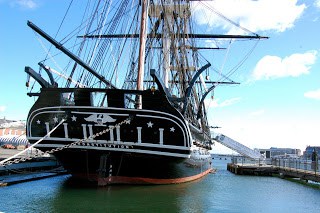 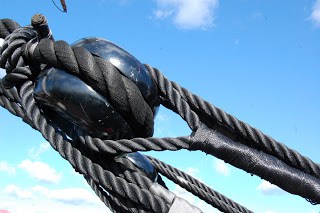 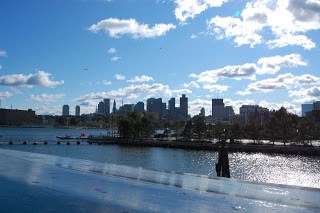 We were sorry to see them leave so soon but very glad they made the trip to see us. It was one of those trips where at the end of the second long car ride, everyone says “that was worth it, but I never want to do it again.” There’s just something about sitting through Connecticut traffic that does it to a beleaguered traveler.