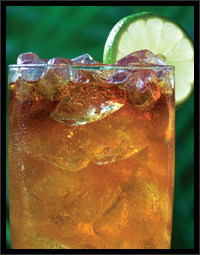 I’m in love with a new drink called a dark ‘n’ stormy. I love the taste, the name, the regionality, everything. I recently discovered it through a friend in a local Boston pub. I’ve known for some time there’s much to love about alcohol in Boston, but it turns out there’s even more than I had originally thought. The dark ‘n’ stormy is made of a Bermudan dark rum called Goslings and ginger beer. It made its way to Boston and other Nor’Eastern port towns via sailors who frequented Bermuda, where it originated. How cool is that? I love drinks with ginger because one of my complaints about drinking alcohol–aside from the red Polish nose–is that it occasionally upsets my stomach. But the fizziness and ginger settle my tummy. If you’re not drinking alcohol, you could just get the ginger beer by itself. Ginger beer is non-alcoholic like ginger ale, but the spiciness of ginger beer can’t be beat. I suppose the drink could be made with ginger ale, but you’d be missing out on the bang provided by ginger beer. I love this drink so much that I want to make it at home, but it can be tough to find ginger beer. Make my own, perhaps? Nate is gearing up to make his own beer some day down the road, so maybe I will. I already found a ginger beer recipe on a neato website I just discovered via a friend.  All this talk is making me thirsty. I know what I’m gonna be drinking this weekend!