Our trip to the Dominican Republic was full of firsts and surprises, much like the country itself. One surprise came with a first: I can’t believe how much I enjoyed taking a vacation with friends! I see more trips with friends in our future; it seems like spending time with close friends has taken a back seat in many of our lives now that we are knee-deep in relationships, careers, and raising children, and scattering to different cities.

It was our first all-inclusive experience, and I must say I enjoyed it better than I thought I would. At first, the public health know-it-all in my head was reeling over the idea that I’d be eating from a buffet 3+ meals a day for a week, but I quickly got over that. And there is something spectacular about being able to peel yourself off a lounge chair by the beach at 2pm for a pina colada and big plate of french fries. Buen provecho! Wish I had both of those right now, as a matter of fact. I miss the constant flow of free and delicious alcoholic drinks, but my waist line thanks me for stopping. All that coconut cream can NOT be good for me. My food favorites of the week: all the tropical fruit I could handle (mango, pineapple, and my personal #1, passion fruit) and the most wonderful red bell peppers, just sitting in giant piles as a garnish to the buffet line. I ate them whole like apples. The hot food was…kinda…meh. It didn’t blow me away, but hey, it was FREE! There were plenty of delectable items at breakfast, my most-loved meal of the day: fried plantains, croissants, thick-sliced salty bacon, and farm-fresh orange-yolked eggs-over-medium made to order every morning. Ok, that’s enough of that, I’m starting to drool on my keyboard.

Another amazing first for me was the “27 Waterfall Tour” we took as a big group. It was hands-down the most terrifying (that includes natural childbirth) and simultaneously one of the best experiences of my life. I wish I could put to words the way I felt about the jumping-off-the-waterfall part of the tour. I’ll start by asserting I HATE the feeling of falling. Never got used to it. I can tolerate roller coasters after lots of peer pressure by high school boyfriends and my family over the years, but do I enjoy it? Let’s just say I’d rather be at the dentist. As I was standing at the precipice of the first drop, it occurred to me that I should have been more scared before that moment, but for some reason I hadn’t been at all. Where was my superego hiding? My brain abandoned me when I needed it most! Who’s going to take care of my children if we both die? Good gravy, what have I done?! I was calm as ever on the 30-minute drive to the mountains. In fact, I enjoyed that ride tremendously because I was getting my first and only glimpse of the countryside, if you don’t count the stressful ride from the airport to the resort during which Nate and I attempted with sweaty palms to decipher the gibberish-Caribbean-Spanish our driver was rapid-fire throwing at us after we told him we could speak Spanish “un poquito.” While we were riding to our tour spot, we were instantly whisked mentally back to Kenya by the familiar sounds, sights and smells: overcrowded tiny buses, kids squatting and watching traffic while devouring bananas or playing soccer with balls made of wadded-up grocery bags and string, diesel fuel, burning garbage, charcoal being made, clothes being washed in an old coffee can in a shanty village. I love the smells of the third world because they are authentic; no perfume, no cover-up, just people trying to make a living any way they can and somehow achieving happiness in the process.

Alrighty, back to the precipice. The first couple of guys jumped like it was no big deal, including Nate, and then I stepped up to the edge and my life, my dignity, and my impending doom all flashed before my eyes. I tried not to think about how the first two were almost certainly about to disappear as I pondered the options. Could I back out now with 20 people waiting behind me to jump and after we just hiked for nearly 2 hours in the steep jungle (a tropical paradise actually, with mango and coconut trees waiting for us to pick their ripe rewards)? Obviously not. I peered down at those who had just jumped, silently pleading with Nate to save me, but all he could offer in return was a look mixed with hope and some of the doom I felt. It’s now or never, eh? Ok then, now. JUMP!

I wish I could give you what you want and say that I loved the jump and it was smooth sailing after that. Psych! I hated each and every one of them, but I fooled many in the group by winding my way to the front at every turn. Could I afford to let my brain get the better of me and talk me out of the next jump? Hell no! So, I was often the first to go, in a let’s-get-this-over-with style. I admit that in between the falls-of-death there were some mostly pleasant, if slightly bumpy, natural water slides to go down, and I did actually enjoy those since they didn’t really involve the feeling of falling. Somehow I never adjusted to the idea that you have to blow out through your nostrils as you hit the water, so I drank about a gallon of water up my nose that day. And yet, no Montezuma’s revenge. Score 1 for Justine.

My last first of the trip was the wedding. Although we’ve been invited to a few destination weddings, this is the first we’ve been able to attend. If you have a small family and tight-knit group of friends, I highly recommend a destination wedding. How else could you ever spend a whole week with your wedding guests? It was like a co-ed bachelor party that never ended. So much fun! One of my favorite parts of the entire trip was the reception, with a rented DJ and our own personal bartenders serving us a party on the beach. I danced in the dense wet sand until I literally thought I might fall over, and we stumbled deliriously to the discotech and then to bed in the wee hours of the morning.

Well, that’s it, my week in the DR. You should go! For those really thinking of going, we went to Puerto Plata and stayed at the Be Live resort (almost certainly named by a non-native English speaker), but I don’t think the resort matters so much; they were up and down the coast. My only caveat is that if you can’t handle the locals attempting to sell you stuff 24/7, you probably shouldn’t go there. But for that matter, you probably shouldn’t go to anywhere in the 3rd world because that’s the typical modus operandi. My advice is to grow some thick skin and learn to say “No, gracias.”

Oh, and I almost forgot to tell you about how I came up with the title of this post. Our official guide to fun beach games at our resort, who calls himself Cappuccino, pointed out early in the week that he could never get past Nate’s poker face to tell whether he was having a good time. He said Nate always looked mean, like a “mafioso.” The group enthusiastically pirated the nickname for Nate, and I must say after 10 years together, it’s the best I’ve heard. All I could come up with before was Professor. Boring. Anyway, “la flaca” is me, “the skinny girl”, after a week of constant “Que pasa, flaca?” and “Ella es muy flaca” from the Dominicans. There is a bit of the machismo going on down there, but it’s all in good fun. 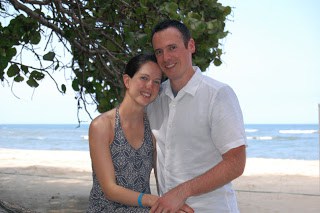 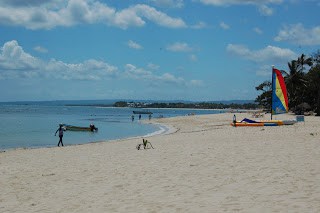