I LOVE PIE. The lack of discussion about pie on my blog–one lonely post–does not adequately reflect my adoration of the dish. Pie is just about my favorite comfort food. Apple pie reminds me of being a kid and baking with my grandmother. Chocolate cream pie reminds me of 2 a.m. post-concert ventures to Waffle House. Blackberry pie reminds me of the best pie I’ve ever tasted at a restaurant back home.

Just as there is no one season for pie, there’s no one filling either. You can fill a pie with anything–from “chocolate to blackbirds,” so says Urban Dictionary. I especially love pie with a surprise filling inside like rhubarb–sweet, tangy, and unexpectedly pleasant. Pies can be great conversation starters that way.

I love the history involved when baking pies. It’s not a fad or fashion to make pie; simply making a pie is in itself an homage to generations past, even if the recipe didn’t come over on a boat to the New World. The pie tradition has been around since the need for easy-to-carry, easy-to-store foods arose. I reckon that in the modern-day fast-paced world we live in has more of a need for pie than ever before.

In my opinion, there aren’t enough savory pies in my world (p.s. I really, really want to go to this restaurant when I visit Seattle. Okay, Al?). Whenever I ponder this dilemma, I am confronted with the fact that there are savory pies–think empanadas, samosas, panzarotti, down under meat pies, and Cornish pasties–there just aren’t many American savory pies (one exception I know of being the Nack-a-tish pie in Louisiana and the other obvious one being chicken pot pie). I don’t count quiche, both because it’s French and because I’ve never had one I truly enjoyed. This dearth is a tragedy because there is nothing more American than pie.

As we learned while living in Britain, the Brits love their meat pies–steak and kidney pie, Guinness pie, fish pie, pork pie, Scotch pie, shepherd’s pie, and I could go on from there. Sweet pies are popular there too: banoffee pie, mince pie, lemon pie, treacle tart, and so the list continues (don’t get me started on the horrid Bedfordshire clanger). I grew to expect a pie on a menu at every British pub and restaurant, to the point where I daresay pie could be deemed more British than American. A tragedy indeed!

The best part about savory pies is that they are typically pocket pies, the perfect shape for eating out of hand wherever you you happen to be. Well, except maybe if you happen to be at Bloomingdale’s.

Call it what you want: hand pie, pocket pie, empanada, pasty. Whatever you call them, they are quite simply the most versatile hot food around. You can put whatever flavors you want into the pocket (including pie flavor?). You can make however many you want, freeze them for later, then heat them and wrap them, and they’ll stay warm for hours. Thus, I believe we need to step up to the plate and start cranking out more savory pie. I intend to start you on your that journey today, so prepare to pack your foodie hobo sacks bags.

First we need to start by building your trust in me. I am not out to frustrate you with a complicated recipe, I swear. While the crust might seem intimidating, is both the most delicious and easiest part of the pocket-pie-making process. Plus, the recipe lets you be creative in using up what you have on hand; you can put 2 Tbs. of literally any filling you’d like. Although I use lard to make my crust, you can of course substitute butter if you’re vegetarian. If you’re vegan, use sunflower oil.

Speaking of using lard, I told you all about my experience yesterday. Well, almost all about it. I forgot to mention that our lard-rendering was actually a highly comical event that involved us not realizing that it was going to take all day and stink up the house. Oh, and did I mention our in-laws were in town? Luckily they are used to us pulling shenanigans like this one–we are the Lucy and Ricky of real food calamities–so they laugh off such adventurous food errors. 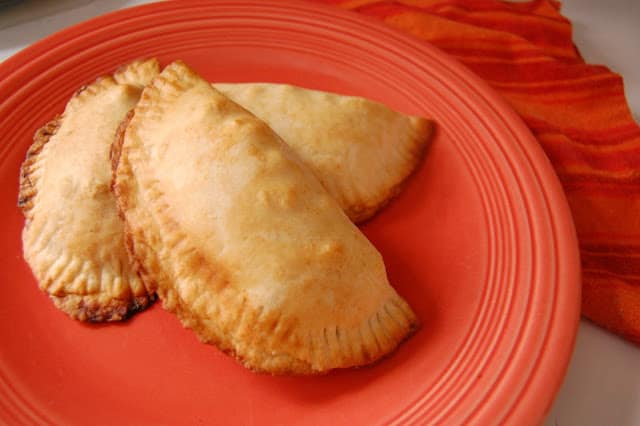 Mix the dry ingredients in a stand mixer or food processor. Add lard in small pieces and pulse after each addition. Drizzle in water slowly, while the machine is running, until the dough comes together (Note: you might not need all of the water. You want the dough to be dry). Turn the dough onto a floured surface and kneed for a minute unti it is smooth. 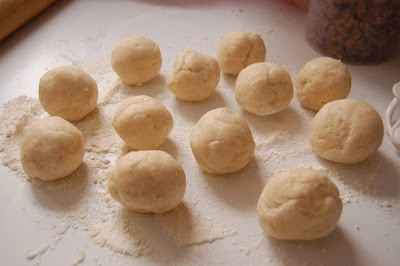 Divide the dough in half, then divide each in half again; those four sections should then each be divided into thirds so there are a total of 12 pieces. Roll each piece into a ball and set aside under a tea towel for 20 minutes to rest. (Note: You can also refrigerate the dough for a day at this point, but let it sit out until it comes up to room temperature before using it).

Preheat the oven to 375 degF. On a floured surface, roll each ball into a 5-inch circle. Top with 2 Tbs. filling, then dip your finger in water and lightly wet the edges. Fold the pocket in half and seal the seam by pressing it together with the tines of a fork. Place each pocket on an ungreased baking sheet (if you plan to freeze them, do so now; freeze a few hours until solid, remove from tray to an air-tight bag, and leave in freezer for up to 6 months). Brush pockets with either an egg wash or milk. Bake for 20 minutes or until golden brown.

*Traditionally, empanadas are filled with shredded chicken or pork, chorizo & cheese, or corn; if you want to stick to the authentic method, you can also add a pinch of smoked Spanish paprika and substitute 1/2 c. of the flour with masa harina, but I don’t and it tastes fine). I personally adore Martha Stewart’s chicken pocket pie filling. The Kitchn compiled a bunch of other filling ideas too (spinach and cheese! sweet potatoes and black beans!). I love the idea of vegetarian pies so am planning to make this one with chard and French lentil filling next week.

Author’s Note: This post is part of Real Food Wednesday, Tasty Traditions and Fight Back Friday

Update (8-26-13): Last night we made our first sweet hand pies using fresh local nectarines and following Martha’s guidance (except substituting lime juice for orange). They were so delicious!