Ten years ago today on my twenty-third birthday I was at Clemson University, presenting the results of my research project in Kenya (studying street children) at the Southeastern Regional Seminar on African Studies. My parents drove up to support me and sat in the front row, eyes trained on me, a regular smiley Frick and Frack of the supportive parenting variety. At the time, I was very happy to see them and have them celebrate my birthday with me but also mildly embarrassed that it might have appeared I had brought my parents to see my “show and tell” at the research conference. Ten years later, the embarrassment has fallen away, and I see it as a tangible display of real love. I cherish the memory.

These days I’m doing more soup-making than conference-speaking, so I thought I’d share my great grandma’s recipe for beef vegetable soup, which I’ve eaten since I was a little girl and will make today for my birthday. Talk about tangible memories. I am sharing my version of her soup; most everything is the same, with the exception of a replacement of anchovies for kitchen bouquet. Nope, it doesn’t taste like anchovies. Inosinate + glutamate = umami, or in layman’s terms, beefier beef soup/stew.

To accompany my beef soup making and as a birthday present to myself, I compiled a mixed tape Spotfiy playlist of music I listened to over the last 21 years, one song for every year of my music life. I could have chosen many songs, but these are songs that make me remember what it was like to be the age when I listened to them. Hope you enjoy the trip down Justine’s memory lane! 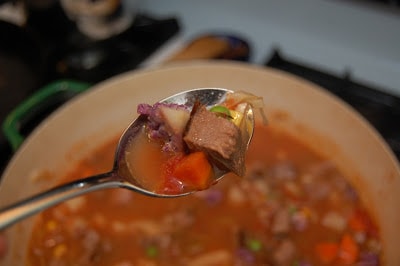 *How you cook the beef is up to your personal style. I brown and braise the whole piece of meat and then chop it later because that’s what my grandmother does, but I know some others dice it ahead of time. I think it probably most depends on what your schedule will be for the day. This is definitely a meal that could be made in the crockpot.

Remove meat and allow to cool a bit. Add remaining water, potatoes and cabbage/cauliflower and cook for 20-30 minutes over medium heat until cooked through (if you’re using barley, add it now too). Meanwhile, chop meat into bite-size pieces. Return meat to the pot and add tomato paste and remaining veggies (add pasta now if using). Season to taste.