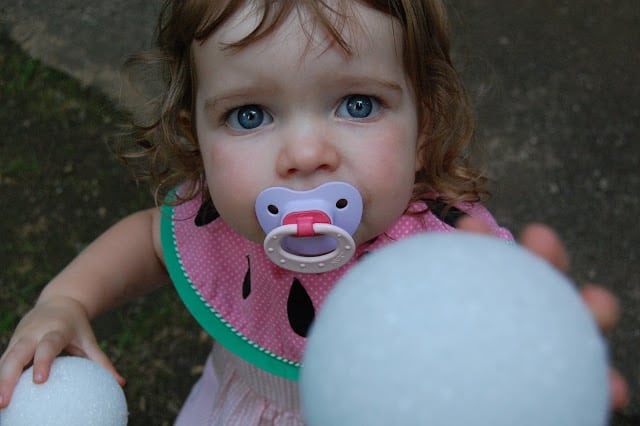 Charlotte has been an easy child from the get-go. It’s not that she never cries, but we can usually figure out what’s bothering her. Tantrums have taken us by surprise lately; however, they are predictable and short-lived, my two favorite descriptors when it comes to phases.

She potty trained incredibly quickly, which I’ve mentioned I believe has much to do with her easy temperament–and perhaps the second sibling is naturally more malleable by necessity. Whereas Vivi proceeds into changes and new activities cautiously, Charlie adapts seamlessly. I figured it would be the same for giving up the pacifier, although I did predict there would be more bumps in the road. And there have, but I’m getting ahead of myself.

Once I got over my initial aversion to them (basically that they are gross bacteria traps), I’ve been fine with both my kids using pacifiers as little’uns. The AAP says using a pacifier can cut down on SIDS in infants and does not interfere with breastfeeding, and we had reflux issues that needed soothing as well. While they also say pacifiers can lead to ear infections, to my knowledge these were rare in my babies; for us, a pacifier was nice to have for a quick fix if my kid suddenly started crying, say while in line at the DMV. Hence why we call it “the plug.” Every parenting decision has its good and bad points, right?

We gave up Vivi’s “dummy” at 18-months-old both because she sucked her thumb, so we knew she didn’t need a pacifier, and because we were tired of locating them and keeping them clean. Who knows if this memory is accurate, but I recall that she barely made a peep about the change before she rolled over and hugged her penguin tight. Back then I didn’t usually read much before I’d go forward with a new parenting idea. Was it being in my twenties? Being the first among my friends to have kids? Having a job and just not enough time for scrutinizing? I’m betting on Door #3. Now I can’t imagine being that way, only a few years later. I read, I ask friends, I consult my doctor. I make lists of pros and cons. Where did “The DECIDER” in my household go? 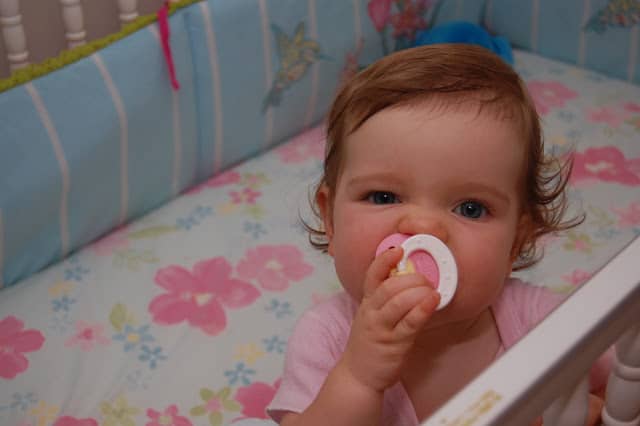 Like Vivi, Charlie has used a pacifier to sleep since birth. Interestingly, Charlie has never really bonded with a “lovey,” but we have kept a Winnie the Pooh and a blanket in her crib hoping one day she would attach to something. Instead, she prefers to be draped in pacifiers at nap and bed time, sucking on one and gripping another in each hand. Tricky.

Our pediatrician brought up at Charlie’s two-year check-up that it’s probably a good time to wean from the plug, citing that she’s old enough to understand if I say “You’re becoming a big kid now, and you don’t need it any more. Pacifiers are for babies.” I value her advice a great deal, so while I wasn’t completely convinced after getting the go-ahead from her, I did consider it much more seriously than I would have.

One day I stumbled upon some help on the Sesame Street website, with videos, posters, sticker charts, and ideas about how to get rid of the pacifier. Babble also has some good ideas about weaning from the pacifier, as does BabyCenter. If you Google “wean from pacifier,” you’ll come up with more resources than you can handle.

I opted for a combination of two techniques: “Swap the pacifier for a new soft toy” and “Sabotage it.” Charlie got a soft Elmo doll for her birthday, and the very day it arrived from Grandma in the mail is the day we began Operation #2, “Sabotage it,” in which I snipped the tops off the pacifiers (disclaimer: I’m not an expert. Don’t try this at home). I let her try to use them all, and she quickly handed them back saying “It broken.” I asked her if she wanted to put them in the garbage, and she did. When she asks for one now, I ask her what happened to them and let her tell me they went in the garbage.

We are about a week into this routine. Unfortunately even with the swapped Elmo (and a pair of her princess panties that she has for some reason decided are also a lovey), she cried for the first few days and nights, but it subsided more each time. Suddenly after about Day 3, it occurred to me that I should put the magic clock–that my kids love like it’s a person–in her room. Soon the girls will be in the same room, but in the meantime Vivi was sweet enough to lend it to her lil’ sis. It helped that when we set it up in her room, Charlie squealed, clapped her hands together and announced “I SO ESSITED!!” Vivi and I died on the spot from the cuteness.

Part of me does wonder whether a gentler approach would have worked. If I had just let her do it on her own, when would she have decided she had enough? But if I’m honest with myself, I’m just not the kind of mom who takes a gentle weaning approach. I let them cry it out when moving from my bed, I weaned Charlotte from the breast when I was ready, and so each stage follows in a similar pattern. That’s not to say I’m a rock when she’s crying; I fall apart just as easily as the next gal, especially when she stops calling my name and starts saying “Daddy!” and “Bahba!” (her word for Grandpa). So sad.

I admit a large part of the decision to wean now is because of our desire to move her into Vivi’s room. I didn’t want to wean later on when she would keep Vivi awake. They sleep well together when we’re out of town, so we are planning to bunk them together starting soon. A new school year, new habits and all that. Wish us luck!

Editor’s note: This post is part of LHITS DIY Linky.