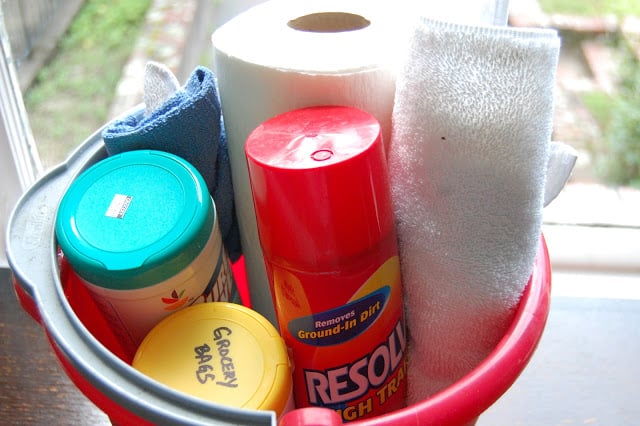 Potty training has got to be the most banal of conversation topics a parent can bring up in polite society. But as resolutely opposed as I was to chatting and writing about the pees and poops of my toddler, I’ve also had a nagging reminder in my mind that I too was once interested in hearing other parents’ experiences (it takes a village, right?). So at the risk of appearing trite, I’m going to delve into the ins outs and outs of ditching diapers. Cool? I promise tomorrow we’ll be back to the regularly scheduled programming of real food cooking and homesteading.

We hopped on the potty train when Charlie was 18 months old, but it wasn’t an every day activity at that point. Typically we would start the day by reading a few books on the potty but never visit it again during the day. She considered the potty to be her toy box and never peed in it. Would you pee in your toy box?

Should I reveal the punch line before the story? I think I will so you will read the following snippets with a happy tone rather than angst-ridden. Charlotte is potty trained! And it only took a week or two of off-and-on training to get here. Holla! This experience has been so different–for the better–than the first time around, and I’m going to share both the highlights of this time around and some flashbacks to what went wrong with training Vivi.

First, here’s the nerdy bullet-point version of what worked for us

So, how’d we arrive at this happy day? Cut back to the start of this month. I waited to get going full steam ahead until: 1) it was warm enough, and 2) we were home from our 2+ week vacation and done with Vivi’s camp. I began the process by becoming familiar with several different techniques.

[Flashback to potty training 2010: I consider my first mistake with training Vivi to be not reading any expert advice. I figured you just whooped the experience up with plenty of praise and treats until your kid figured it out. When that method showed signs of failing, my frustration got the better of me, and our foundation unraveled from there. Once I completely removed emotion and instability, she was trained in a few days.]

One big difference on this second circling of the merry-go-round is that I’ve got time on my side, both because of time of year and since I’m staying home full time. Summer has a great slow vibe, so if we all decide to go pantsless and watch movies all day, it’s no biggie. I read both online resources and library books to gather information and hone my plan of attack. I’m going to list a few of my favorites first:

Book:Diaper-Free Before 3: The Healthier Way to Toilet Train and Help Your Child Out of Diapers Sooner. Thanks to my friends who recommended this book. I enjoyed it so much I read it all in one night! I appreciated that the author took a natural approach to potty training just as another part of life, the same way you would with introducing any other new routine.

Mom Advice: How to Potty Train a Toddler in Two Days

Alpha Mom: Potty Training in Cloth Diapers (n.b.: We don’t use cloth diapers, but I like her approach anyhow)

I also read some other books too: Toilet Training the Brazelton Way and Toilet Training in Less than a Day. I have mixed reviews of them. Without taking too much time, I’ll just say they weren’t for me. For one thing, they were written by men; not that there’s anything wrong with that, but I just think I connect better with moms (hence our pediatrician is a young mom of two). 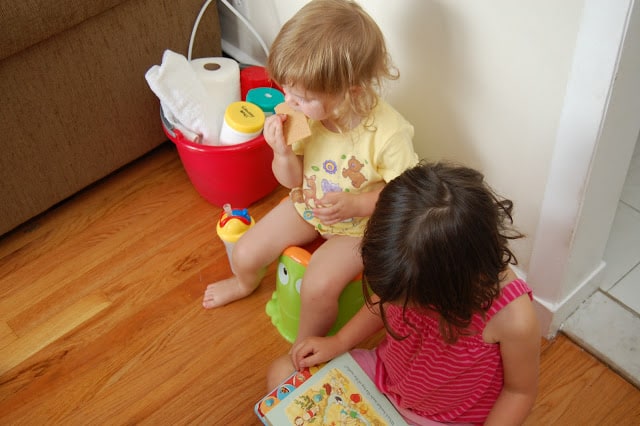 After reading I stocked up on some equipment

1) Bucket with cleaning supplies for accidents, including a stash of plastic grocery bags to contain the messy rags

2) Snacks and juice to keep the trains moving

3) Training gear (our hand-me-downs for Vivi were too big, so I bought new ones). I considered getting some fancy cloth diaper pull-ups, but I’m glad I opted instead to get the simple Gerber pants and Dappi plastic covers. I also got a piddle pad for the car.

4) A new potty. Charlie didn’t seem to like the potty we had (this Graco one with a lid), so I moved it to the upstairs bathroom and got a froggy potty for downstairs. She flipped over the frog from the start! I prefer it too because it’s easier for her to sit down and to pick up the bowl to empty it.

Once I had read up and gathered all my gear, I was ready to pick a method. I liked some of the ideas in the “three days or less” methods, but the idea of sitting in my living room for three days with my kids without going anywhere was less than appealing. I wanted to enjoy the potty training process if possible, and I knew I would resent it if confined to my house for too long.

[Flashback #2: I trained Vivi before I had come to my greatest parenting realization: how unproductive it is to swim against the current when it comes to my kids’ milestones. I’m much happier (as are they) now that I relax and let the milestones happen as they will.]

Ultimately, I landed on the “no pants in the house” method, an idea I got from a friend who’s also training her under-two daughter. I simply rolled up the rug, removed her diaper in the morning, and let her wander around pants-less. At first I kept a close eye on her because her time between non-verbal signals and peeing was quick; I whisked her to the potty, and after a day or two she began announcing the need and then finally going willingly on her own.

Charlie got sick in the midst of training, but we had taken such a laid-back approach to begin with that it didn’t bother me to put her back in diapers for a few days. Similarly, I have put her in disposable diapers while we’re out and about. I don’t think wearing diapers has confused her or lengthened her training; in fact, she even requested to use the potty at a friend’s house a few days ago, while she was wearing a diaper (and the first time in a regular toilet).

Potty training has been easier the second time around, but it may not be for the reason you would think. While Vivi has been great at modeling the right behavior, her help is nothing a friend or fellow day care attendee couldn’t do. Speaking of day care, were we still in a situation in which we required it, I would approach that interaction differently as well. I let the language barrier and my nanny’s experience be a big intimidating brick wall to the discussion, when I should have just stated my preference from the start. Who knows what she might have been willing to do? I never even asked!

Then there’s the temperament equation. You can’t underestimate the importance of reading your kid’s personality. With Vivi, every new experience was taken with remarkable caution that would require many repeated interactions for her to be comfortable. Whereas, Charlie sees you pull her pants off one day and just shrugs it off, like “M’kay, no pants from now on. Cool.”

I have also felt much more prepared and confident this time around; there’s no denying my experience the first time helped my confidence level, but I think anyone can be confident if they do their homework and approach potty training with a positive attitude. Good luck!

Update (8-10-12): I forgot to mention that we do still put her in diapers for nap time and bed time. I am still pondering whether to get some cloth diapers for those times. Do I really want to wash only 1-2 diapers a day? Perhaps not.

I also didn’t really want to mention the money savings in the original article because I don’t want you to think that’s the reason we started training Charlie. We trained her because she seemed open to the idea, and boy were we surprised at just how open. But the savings are a nice side effect! Even if it takes her another year to be night-time potty trained, with just 2 diapers a day, we will save so much compared to what we spent on diapers for Vivi.