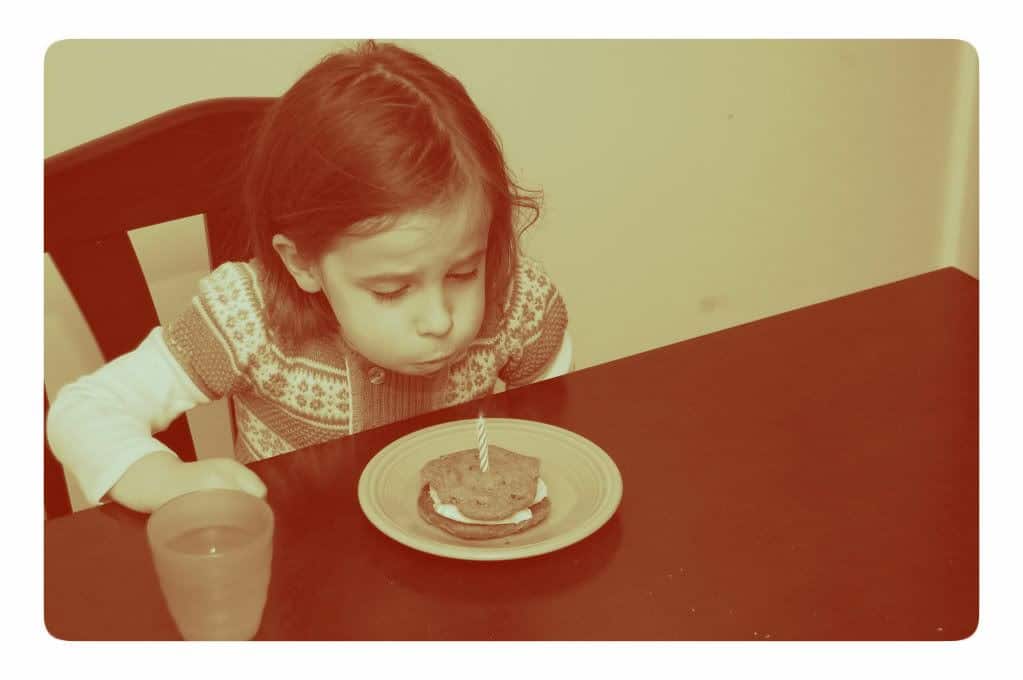 Genevieve turned four at the end of April. This was the first of her birthdays that I was as excited about as she. Well, almost as excited. When she was turning one, we decided not to have a real party with kids and steamers and instead to wait until she expressed interest in a party. This is the first year she seemed excited about the party aspect of the birthday, so it seemed like a good year to throw one.

While I’m not generally enthused about bringing in new items to the toy rotation, I did enjoy taking a simple, frugal approach to her party planning. I started mentally preparing for the big day after her best friend’s party in February. Vivi’s party was a great success! I thought some of you might be interested in the details, so here’s a synopsis of the day’s festivities.

My favorite part of the party was planning and daydreaming about it with Vivi. She has such a vivid imagination, and I let her creativity be our guide. Remember that Sesame Street game, “One of these things is not like the other, one of these things just doesn’t belong”? Let’s play it. The following were Vivi’s requests for items to be present at her birthday:

4) A tea party with pink lemonade

Batman! I’m fairly certain she’s never seen a pink Batman cake, so that is pure imagination at work. I wasn’t sure I could come up with a creative solution for how to provide said cake, but I figured a bakery could. As tough as the challenge might have been, I was over the moon to be making a Batman cake instead of a Sleeping Beauty cake. The Dark Knight may have his own deep-rooted psychological troubles, but at least he knows better than to sleep through all the action.

Luckily, request #1 quickly faded into the background, as usually happens with all things Barbie. Request #2 seemed the most challenging on first glance, but I did still have her gift to purchase. I brainstormed thoughtful but inexpensive gift ideas. Then I found a Waldorf doll that met her exact specifications of a “rainbow unicorn,” this pony from an Etsy shop called Woolies. I thought it was too good to be true, so I snapped it up.

I didn’t want my friends to worry about buying big gifts for Genevieve, both for their sake and ours, but I wasn’t sure how to approach the discussion with them. As it turned out, a quick convo was all it took. They loved the idea of bringing only small trinkets that would allow their kids the opportunity to pick out a gift and give it away, a great lesson in sharing, but would also not perpetuate the overload of junk typically present at kids’ birthday parties.

I can’t for the life of me remember where I first heard the following tip, but it’s too good not to pass along. To keep down the level of stress and chaos at the party, the number of child guests should equal the age your child is turning. For us, that meant inviting Genevieve’s two best friends, who have little brothers she also loves to play with. We also had two friends in town with their little girl. Including our family of four, there were a total of 8 adults and 7 kids, which is a bit more than that rule would suggest but worked out well for us. After having the party, I’d say the most important rule of thumb is probably that the adults present should be able to do man-to-man as opposed to zone defense.

We decided to get her a cookie cake because she is always disappointed by traditional cake, and both Nate and I dislike ice cream cake. But chocolate chip cookies…I mean who doesn’t love those? The day before her birthday, we experienced two unexpected cookie cake roadblocks. First, after speaking with several befuddled New England bakery clerks, I learned that apparently cookie cake is a southern thing. Which meant both that we had to make it ourselves and figure out how to do the decoration. And then, Vivi decided she wanted a pink Spiderman cake instead of Batman. Uh oh.

My solution? I asked my friend Liza to make it! Which brings me to my first birthday party recommendation: invite a good friend to the party, preferably someone you can trust with details so you can focus on other things. Liza was a great friend to have there because I could give her last-minute instructions like “make a Spiderman cookie cake,” and she not only took it all in stride, she made two awesome, tasty cakes!

The party lasted two hours, which provided enough time for the cake and presents and two activities. Thus blossomed our “Garden Tea Party.” Vivi loves having “tea” parties with pink lemonade, and during our many afternoon play sessions she would frequently say “Let’s have a tea party at my birthday!” Check. 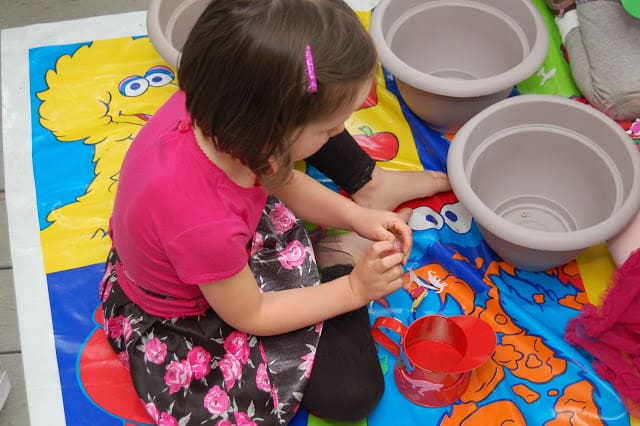 As for the “Garden” part of the day, I knew everyone would want to be outdoors if it was a pleasant day (few and far between in the Boston spring), so I wanted to incorporate a structured outdoor activity.  I decided decorating pots and replanting some of our tomato seedlings in them would a) allow me to pass off some of the overzealous planting I did, b) give me something fun and environmentally-friendly to give as pseudo goody bags–a term I dread for its connection to unwanted dollar store crap–and c) would give us something fun, time-consuming, and only minimally parent-led to do. Winning! 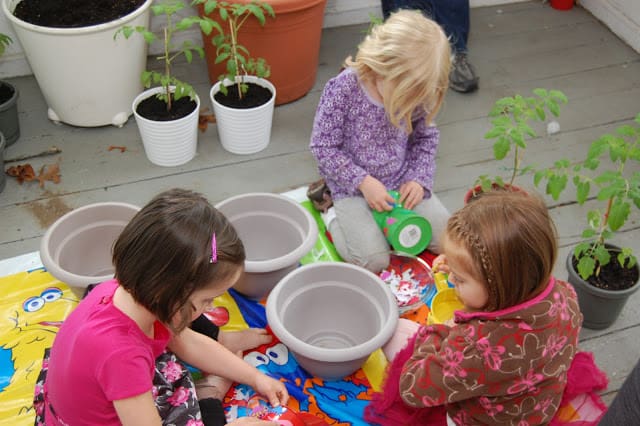 Vivi enjoyed the process of sowing seeds so much that I knew it would be a hit with the kids. My basic philosophy when organizing an activity for kids is when in doubt, throw in some dirt. I prepared the moms ahead of time by mentioning the kids should wear or bring casual play clothes.

My second activity was going to be a butterfly-catching trip to our local woods, ending with playing at the playground. But it seemed like the kids were having so much fun playing, and the adults chatting, that we opted to stay home and let the natural course proceed. Which brings me to my other bit of party advice: Go with the flow

Vivi had her heart set on the trip to the woods, but when the party actually came, she was perfectly content to be chased by a mommy monster (me) and sing songs with her friends while hiding under Charlotte’s crib. She also adored playing with one of her new gifts, a paint dot art set (confession time: when I first saw that website, I said “What’s a Do Tart?” Duh). Have you seen one of these? It has provided us hours of quiet, clean fun. One of the dads astutely pointed out that the paint design bears a striking resemblance to Bingo daubers. So it’s really a two-for-one deal! 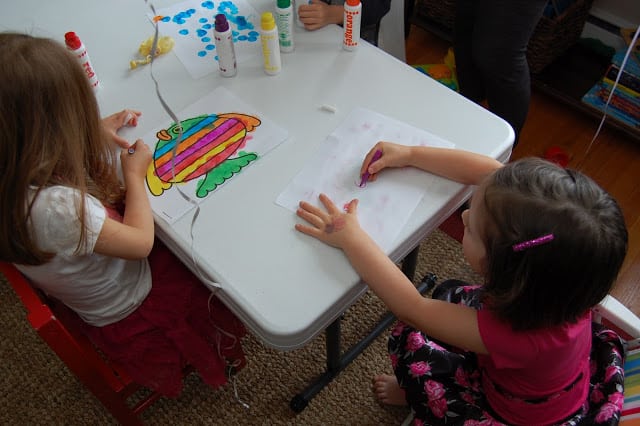 Even with as flexible and calm as we were about the big event, it was still loud, messy, and chaotic. And of course FUN in all caps. But we all needed a bit of R&R afterward, so we ended up taking the planned walk in the woods and played at the playground after we said goodbye to the guests. When conducting my hotwash of the party, the following was the only criticism I heard from the birthday girl: “I wish you had gotten me a unicorn that talks.” I can live with that. 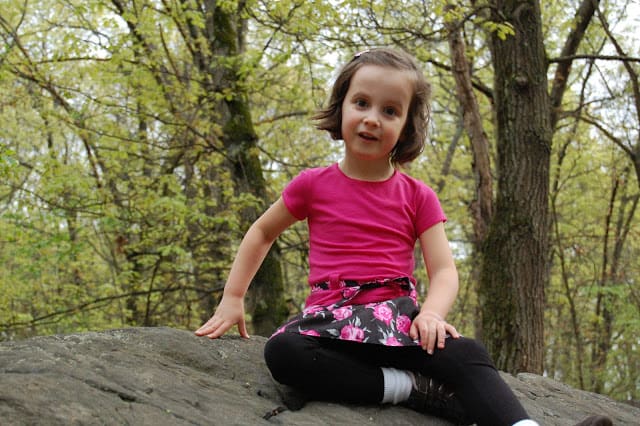