TGIF!  Nate has the day off today; he’s been working 65+ hour weeks, so he certainly deserves a “rest,” if that’s what you call spending the day with the munchkins. In honor of our jump-start on the weekend, I made my spinach manicotti last night. It’s splendid dish for winter, hearty and savory and cheesy. I’ve been making it my own way for years, ever since the hubster and I began our courtship.

Back when we started dating, I was living in a house with friends in Athens, Georgia, and our landlord was the famous Dexter Weaver, aka Weaver D. Even if you don’t know of Weaver, you’ve probably heard of the REM album called “Automatic for the People,” which is named for Weaver’s slogan at his soul food restaurant, Weaver D’s Delicious Fine Foods. Every month I would literally cross the tracks from campus to bring Weaver our rent check; I can’t remember if it was some kind of arrangement we had that I should bring it in person or if I just loved going there so much and seeing his smiling face. His warmth is legendary, and I wouldn’t be surprised to learn he also coined the phrase “soul food.” If Weaver taught me anything, it’s that soul food doesn’t have to be fried chicken. To attain true soul food, all one need do is cook from the heart. Oh, and of course, “love yo’ mama.”There might be better recipes out there, but this one is ALL MINE. I copied it down onto a note card while watching a cooking program in college (my absolute favorite thing to do after early morning crew practice). Remember when you used to write down recipes, by hand? I made little chicken-scratch, barely-readable notes in the margins, things like “More heat!” and “Needs to be cheesier. Cheese on top too?” Eventually the card got splattered enough that I transferred the recipe into my favorite hand-written book, given to me by a cousin and covered in dainty butterflies and pears.By now, I don’t even need to flip open the book to know how it’s done. Quite comforting to have the old standbys for which you’ve memorized the ingredients, isn’t it? 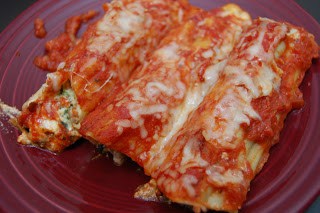 Preheat oven to 375 degF. Heat sauce in the microwave and cook noodles in boiling salted water according to package directions. Wring out spinach in cheesecloth or a tea towel. Mix spinach and remaining ingredients and stuff in cooked pasta. Put ½ sauce on the bottom of a 13” x 9” pan. Add stuffed shells and cover with remaining sauce. Top with more mozzarella and Parmesan cheese. Bake for 25 minutes, then crank the heat up to 450 and cook 5 more minutes to brown the cheese. It makes approximately 11 shells; I fit 5 shells in two rows, and one across in the middle, like so: 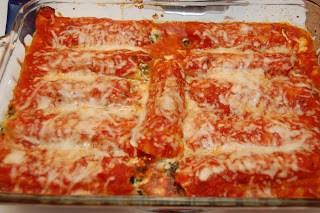 I make this dish frequently on the same day as Ina Garten’s lasagna and freeze both in those throw-away foil pans for later. I was a baked-pasta-making machine while pregnant both times, but now that I have a chest freezer, I am really in business. If you do decide to freeze it, either defrost it for a day in the fridge, or if you want to cook from frozen, bake for 45 minutes.

After dinner, I spent some time LOLing at one of my go-to giggle-fest blogs, The Bloggess. Did you catch her famous metal chicken post from last summer? Some day I’d like to have a farm, where I will most certainly place a giant metal chicken, whose name will be Sir Frederick Cluckersworth. You see, Freddie’s been knighted.

Afterward, we spent the evening watching the marvelous, peachy, wicked Downton Abbey. You can stream the first season on Netflix. Go ahead, add it to the queue now! I’ll wait… It’s a PBS Masterpiece Theatre production about wealthy, Titanic-era British lords and their servants, like Gosford Park but with dialogue that can be easily understood. In fact, it’s written by the same person as Gosford Park

To give you an idea of what it’s like, this is my favorite line in the show so far, spoken by the spectacular Maggie Smith, “But…what is a weekend?”Another classic, also Maggie: “Why do you always have to pretend to be nicer than the rest of us?” Haven’t you wanted to ask someone that before? Also, did you notice the local pub is “The Dog and Duck”? My, but I miss pubs. It’s nice to see Elizabeth McGovern again. I loved her in one of my favorite John Hughes classics, She’s Having a Baby

Do you love Downton Abbey too? If you haven’t seen it, go watch so we can discuss it! What’s your go-to “soul food” dish?

Editor’s Note: This post is a part of Real Food Wednesday, Simple Lives Thursday, and Fight Back Friday