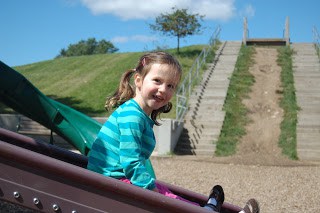 Vivi: I love Grandpa Jim. I saw him yesterday. ‘Member that, Mommy?
Me: It wasn’t yesterday, it was longer ago than that. So you can say you saw him “a while ago.”
Vivi: I can also say “banana.”

Me: What are you thinking about?
Vivi: I’m thinking of how whales eat bunnies.

Nate: Vivi, you don’t need to touch Charlotte so much. People don’t like to be touched all the time, so let’s not touch each other any more for a while.
Vivi: But we can touch ourselves whenever we want!

Vivi: Oopsy woopsy! That’s a good thing to say, right Mommy? And ‘damn’ is a house that a beaver lives in.

Thanks to school, she now has a whole new vocabulary. Here are some examples…

Vivi: This oatmeal is stupid.

Vivi: I hate the sun.
Me: Where did you hear that word?
Vivi: A boy at school. He hates everything, ‘specially the sun.
Me: Well, we don’t say that because it isn’t nice. If you aren’t fond of something, you can say you don’t like it.
Vivi: Well, I’m saying it because I’m mad at it, and I hate it.

Me: What are you saying?Vivi: Shit!Me: What does that mean?Vivi: It means you crawl around the house and you put a blanket on your head, and you say “Shit shit shit.”

Vivi: Can I help you fold the clothes?
Me: You can fold the panties, and I’ll fold the big sheet.
Vivi: But I’m stronger than you, so I can do it!