When I want a vegetarian meal, my go-to proteins are all beans and legumes. I recently learned there is an American Pea and Legume Council (who of course came out against Pres. Obama’s recent comment about having to “eat our peas”), which I think is as unnecessary as it is hilarious and kind of awesome. Only in America, right? As I was saying, I love legumes, and my favorite is the chickpea. What a cute name! And so many names, I might add. Today I’m sharing my favorite chickpea recipes.

The first has to be hummus. I could eat a gallon of hummus with salty pita chips. My all-time fav is not even homemade, but the one sold at Trader Joe’s that has three varieties in one container…original, roasted red pepper, and cilantro. Yummmmmm. When I make it at home, I use an Ina Garten recipe

Lately I’ve been trying out vegetarian Indian recipes. I love channa masala, a spicy chickpea dish, so I think tonight I’ll try a recipe I found on one of my favorite food blogs, Smitten Kitchen

I adore soup, so my next two chickpea recipes are soups. While I admittedly don’t make much soup in the summer, these are both light with a clear broth. Both also come from Cooking Light, which my sweet mom-in-law has been sending me for years. Moroccan chickpea stew is great with tangy yogurt, as they suggest, and minestrone with chickpeas, which I adapted below, is wonderful frozen and reheated. I love squash and zucchini, and I routinely have leftover pesto, so I freeze it in ice-cube trays and use it in this recipe. 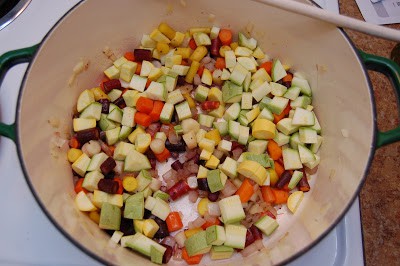 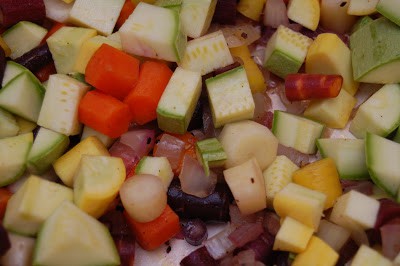 Heat a Dutch oven over medium-high heat. Add a couple of turns of oil, eggplant and next five ingredients (through garlic). Saute until onion is tender, about 4 minutes. Stir in broth, tomatoes, and bay leaf, and bring to a boil. Reduce heat and simmer for 15 minutes. Discard bay leaf. Add parsley and next five ingredients (through chickpeas). Cook 5 minutes or until thoroughly heated. Stir in spinach; serve immediately or freeze.