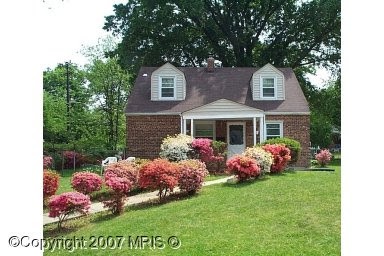 We bought our first house last weekend! We are still reeling. After renting for so many years, it’s hard to believe we finally own a home. It is in Falls Church, VA. For people who know DC, it’s just inside the beltway, west of 7 Corners, between Lee Hwy and Rte. 50 in a neighborhood called Tyler Park. It’s about 3 miles from the metro, 15 min from Nate’s work in McLean, and not far from I-66. Unfortunately the listing has been removed from the internet, but luckily I downloaded this picture before that happened. I think the first item on our agenda is to move those azaleas to the back yard. What were they thinking?! It turns out we bought the home from the original owner, a Greek widow whose husband cared for the house meticulously and seemed to have a penchant for using aluminum foil for random repairs. “Put some windex on it!”

We close on September 23rd, and we chose such a late date because we had already signed a lease through then for the temporary Ballston apartment. I will need my own car since I can’t walk to the metro, but we are waiting until I get a job to worry about that. I am looking for day care for Vivi in anticipation of going to work, which hopefully will happen at the end of October or beginning of November. I hope to find a nice woman who stays at home with her children and doesn’t mind taking one or two extra. It is even harder than I thought to find that kind of situation, although the internet helps some. What I really need is to join a moms group. I joined the Arlington Unitarian church, so I am hoping to talk to moms there about who they use. The church has day care but it’s only 3 days/week in the morning. We are going to visit a children’s center that we will probably use when she is 2 years old, and I just learned I need to get on a wait list now! I’m preparing Vivi for her IQ test…only kidding (I hope).

I just watched the most hilariously ridiculous anti-Obama ad I’ve seen yet. Being in a battleground state, I can practically recite the campaign ads I’ve seen them so often. I can speak from (only slightly biased) experience when I say that McCain is running more of a dirty campaign so far. All the Obama ads are pro-Obama, and so far most of the McCain ads are anti-Obama. I can’t tell you much about what McCain stands for based on these ads, but I can tell you Obama is a “celebrity” who plans to “raise bad, painful taxes aimed at the elderly”…and I’m NOT kidding. Ha!

We had a fun day with Vivi today. We started by taking her to the pool, which was a great success. It was freeeeezing cold, but she “played” in the water like a champ–at this age, that mostly consists of arm-flapping and cooing. Next we went into the city to the zoo, and she enjoyed people-watching way more than looking at animals. She babbled to and flirted with strangers the whole time, and she got lots of smiles and “awwwww”s in return. She is more fun every day, and although she still has trouble sleeping at night occasionally, I am enjoying motherhood much more now. I can’t wait until she can sit up on her own, and I must say I’m looking forward to dropping her off for a few hours at the church day care soon. She is very attached to me, and I want to get her used to being held and cared for by other people so that we don’t have a huge meltdown when I go back to work.

We have been watching the Olympics nightly. Besides a heaping serving of Michael Phelps and teeny tiny serving of rowing, I have enjoyed synchronized diving, gymnastics, and women’s marathon at the moment. And how about that opening ceremony–incredible! I’ve never seen anything as intimidating as 2008 Chinese men drumming and chanting…it gave me goosebumps. Nate is currently in DC rooting for the losingest baseball team in the league.

I’ve recovered very well from the pregnancy and childbirth, even dropping below my pre-pregnancy weight this week. I can’t seem to eat enough calories to keep up with what I lose due to breastfeeding–I know I know, poor me. But by far the strangest and most aggravating (not to mention scary) side effect of childbirth is that almost exactly on the 3-month mark I began losing my hair. Apparently it’s not that uncommon and is called telogen effluvium. It happens because the body considers childbirth a trauma, and the hair follicles go into a temporary resting phase. I could lose as much as 60%, and it should be back to normal growth in about 6 months. But in the meantime, don’t be surprised if you see me wearing a headscarf. Luckily I started with a ton of hair. I’m hoping for the best!