I think probably every marriage has THE story, a tale that defines your marriage in such a way that you can recite it from memory you’ve told it so many times. Maybe yours is like the ones in When Harry Met Sally, great love stories that end with “and I knew it was meant to be like I know a good melon.” Mine is about a day I proved my husband wrong.*************
I must pause and tell you that if you don’t already know him, my husband is a helluva guy. He is brilliant, the kind of person you’d choose as one of your lifelines on a game show. He knows his stuff, and he oozes confidence. It’s sexy, you know? He’s not wrong often, so I’ve developed a jig I like to do when he is. It’s a little number I unimaginatively refer to as “the Nate’s wrong dance.”*************
The story of our marriage starts with us as newlyweds living in Madison, Wisconsin. As adorable childless couples are wont to do, we decide to drive to Chicago for the day. I’m an organized, punctual sort of person–take, for example, the fact that both of my children were born on their due dates–so I plan ahead and buy tickets online to see the Sears Tower. You get to pick your time this way so you don’t have to wait in the ticket line. Also, I heard they were less expensive if you buy them online, and I’m the kind of frugal chick who loves saving three dollars.

By the time our appointment rolls around, we’ve been walking around Chi-town taking in the sights for some time, and we feel like old veterans. We’ve had a hotdog, we’ve walked the Magnificent Mile, we’ve seen the River Esplanade. Arm in arm, we round a corner and see a giant building. Nate moves to cross the road, and I stop and motion to bring out the map. He gives me the sort of impatient look that says “Look at it! It’s obviously the Sears Tower. Let’s go.” So, we go.

When we arrive, I pause and look up, wanting to take in the full effect from the ant’s eye view. It’s impressive, this building. It has its own weather, in that when you stand close to the tower, the wind nearly knocks you over, it’s so powerful.

As I’m taking it all in, I notice that a sign on the building reads “John Hancock Center.” Hmn. At this point, I turn to Nate and say “Are you sure we’re at the Sears Tower? It says ‘John Hancock.'”
To this question, Nate replies, hehem, “It’s not going to say Sears Tower. It just is the Sears Tower.”  See what I mean? Real smooth.

We walk up to the will call window to get our tickets, and since you’ve likely figured out what’s happening by now, you know already that the lady can’t find our name. I’m cursing the fact that I chose not to print the electronic tickets. With only minimal explanation on my part, this very sweet gal working the window decides to let us in without our tickets. God bless the Midwest.

So then we’re standing in the line to get in one of the three elevators to take us to the top, and there’s a track playing in a speaker above. David Schwimmer’s voice is providing interesting facts about the building, so I listen up.

700 condominiums!
“Did you know there were so many condos here?” I ask, incredulously.
“Nope, no idea,” he shrugs.

The tower boasts such famous residents as Jerry Springer.
“What?” I crinkle my nose at Nate.
“Huh, that’s weird,” he says, still not getting it, in the way only a man in his early twenties truly does not get it.

The tower features America’s highest indoor swimming pool and highest indoor skating rink.
“Are you sure we’re in the Sears Tower?” I say, wanting to give him one last out.
And he says, “What do you think I am, an idiot?”
I have nothing to say to this. I’m not sure of the answer yet. I go back to listening.

The John Hancock Center is the fourth tallest building in Chicago.
Hands up in surrender, I blurt, “Okay, I’ve heard enough.”

I had reached that moment in the proverbial car trip in which the wife opens the door of the moving car so that she can get out to ask for directions. I pull out my map. I probably don’t need to tell you what I see. There we are, in the heart of Michigan Avenue, at the John Hancock Center. The Sears Tower–which, ironically, is actually called the Willis Tower now–is all the way aaaaaacross town in the financial district.

We sheepishly go over to the woman ushering people into an elevator and tell her about our mistake. She listens, smiles, and says “Ha okay, just go ahead back in line. You’re fine.”

A stickler for the rules, and evidently not one to understand subtlety, I say “No, I don’t think you understand,” and then start to try to tell her again.

“No, I don’t think you understand,” she says, still smiling, “I’m trying to help you.” Wink, wink. She nods and shoos us back into line. And I feel like I should tell you, in case you don’t already know, this is how midwesterners are. They want to help you, despite yourself.

So at the end of the day, this is a story about how we got to see both Sears Towers. And I gotta say, the John Hancock Center has a better view. Wink, wink.

*************
Yes indeed, this is THE story about the day my husband learned some valuable wedding-day advice we were given by our friends’ parents:

Learn and repeat the phrase “It turns out you were right” whenever applicable.

Back then I would have told you I knew it too. But today, on our anniversary, I’m pausing to reflect that I hadn’t yet accepted the second part of that sage wisdom:

When your partner says “It turns out you were right,” accept their admission and never speak of it again.

Never speaking of it again is the opposite of what I’ve done all these years. And so, as a gift to my husband, I agree today that I will no longer tell this embarrassing story at cocktail hours and dinner parties. The beauty of marriage is that he will likely tell me he doesn’t need this gift. After twelve years together, nine of those years married, we’ve accepted each others broken records, our stories we tell each other–and tell others in front of each other–again and again. Our peccadillos and eccentricities make up the “we” that we are building. What a wonderful we it is. 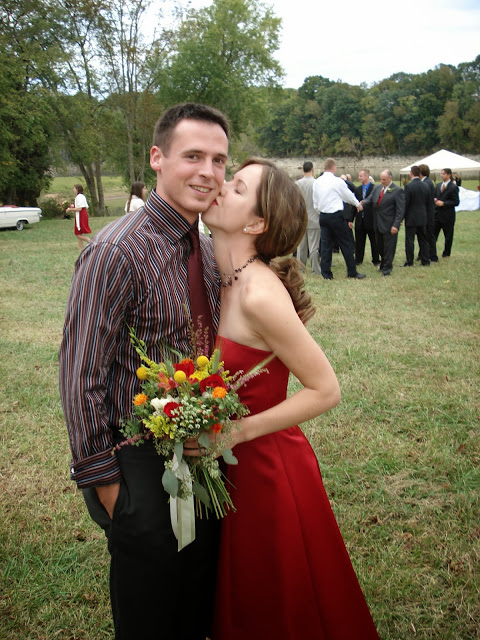