Author’s note: I originally published this post on February 8, 2012. In honor of yesterday being Food Day–which encourages us to get kids cooking–I am reposting my Aunt El’s recipe for cinnamon rolls (and dinner rolls) today. It is my children’s favorite dish to help me make. I love it because I get to play with them and tell stories about Aunt El, allowing me to–as Kim John Payne says in Simplicity Parenting–“emphasize the importance of now while introducing the infinite.”

My Great Aunt Eleanor is one of my favorite people. I happen to believe she was one of the best people ever to have graced the Earth, but I suppose I’m a bit biased. My family ascribed to whatever knowledge El shared with us as the absolute, 100%, golden truth. Perhaps it is because she was the big sister, or because she raised six children, or because of her big personality. Perhaps it was a little of all of those, and it didn’t hurt that she always gave darn good advice.

I competed in several fundraising races in her honor; I would have even done one of those lumberjack contests if I thought it would have helped her fight with cancer, not that she even needed help most of the time. El fought cancer as bravely as a person can. She was a miracle, at times an unexplained physical impossibility, and she always lived up to life’s full potential, whatever health constraints were put on her.

Not long before she finally succumbed to her illness, Aunt El gave a tutorial for cinnamon-roll making, maybe feeling like baking was a tangible act that, in so doing, would always help us bring forward memories of her. My, she was wise. Watching her make the cinnamon rolls and witnessing the hilarious, cackling, clucking spectacle that is a room full of the females in my family (hens ain’t got nothin’ on these gals) was a wonderful experience.

I videoed for more than half an hour, but I’ll just share a snippet. This clip, the beginning of the tutorial, is one of my favorite parts because you can hear a bit of the background chit-chat, can see where I get my frugality from, and can hear my Great Uncle Van make his manly exit. This was such a fun day!

Three years have passed, and I am finally making the rolls. At first I was intimidated by the yeast requirement, but once I entered the world of bread-making, I became excited to make them! First of all, they’re delicious, and secondly, if you’re going to cram in all of that fatty goodness, you may as well use ingredients you can control instead of the stuff out of a can.

Y’all know how I love heirloom recipes, so I’m excited to share El’s cinnamon rolls with you today. I hope you’ll find them as delicious as my family did. The four of us ate sixteen rolls in two days. I won’t tell you who ate the most…okay, it was ME. El adapted her recipe from Fleischmann’s 1983 Best-Ever Breads cookbook, and I altered her recipe slightly by using King Arthur white whole wheat flour instead of some of the all-purpose flour and cutting out a bit of the sugar.

Even with the healthy twist, they were still as delicious as I remember hers being. You can of course substitute unbleached all-purpose flour if you’d prefer. I provide two variations below, one if you have rapid-rise yeast and eggs, and the other for regular yeast and milk. Both will make delicious rolls. I made my dough the night before and rolled it out in the morning, which made it feel like much less work and impressed my groggy husband as he grumbled into the kitchen on Saturday morning. What’s this, cinnamon rolls? By scratch?! 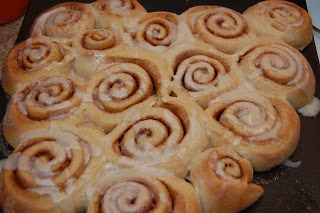 Note: two variations for remaining roll ingredients are below; one for rapid-rise yeast, one for regular yeast.

Start by putting about two cups (doesn’t have to be exact) flour, sugar, yeast, and salt in a large mixing bowl; whisk to combine. Heat liquid(s) and butter until very warm, 120 to 130 degF. Gradually add liquid to flour.

Once combined, stir in the last cup of whole wheat flour with a wooden spoon [if using rapid-rise yeast, add eggs now].

When the dough is sticky but beginning to form a ball, turn out onto floured surface. Let it rest for a minute while you wash out your bowl. Then knead it for approximately 5 to 10 minutes, slowly adding remaining flour about 1/2 cup at a time. 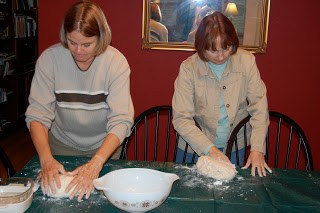 Oil your bowl, then drop in dough, turning once to cover it in oil. Cover bowl in plastic wrap and let rest for at least one hour; you can refrigerate for up to 24 hours. After dough has rested, preheat oven to 375 degF. Roll it out on a floured surface into a 10″ x 20″ rectangle. Brush with melted butter, then sprinkle filling over the butter. Start from the 20″ side and roll tightly; pinch seam shut at the end.

Cutting the rolls: I cut off the two ends to make it cleaner looking and give the extra dough to my kids to play with. Cut dough in half and half again so you have four equal rolls, then cut each of those in half twice again to make a total of sixteen rolls. Place rolls so they touch each other, seam side in, on a large greased baking sheet (note: rolls will rise to nearly twice their size in the oven while cooking). Bake for 18-20 minutes. Mix together glaze and pour over rolls while still hot.

We stacked our remaining rolls and covered with two layers of plastic wrap. They reheated nicely in the oven the next day, and I poured an extra 2 Tbs. of melted butter on them to keep them from drying out.

Update (2-19-12): I had no idea that this post would become my most popular ever in only a week’s time! I am so pleased that Aunt El’s wisdom lives on. I realized after posting that I didn’t mention this recipe is actually a Master Bread Dough recipe, so you can make any number of breads from it apart from cinnamon rolls. This week I tried dinner rolls, which follows the same recipe above with a few twists.

dinner rolls
makes 24 rolls (or 12 if you freeze half) 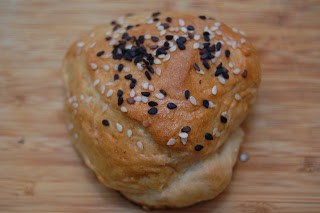