Charlie has gotten to the age where she sings the alphabet “T…U…Vivi.” Vivi went through that phase too, and it is just about the sweetest sound to my ears. I will surely miss that stage when it’s gone for good. She adores her big sister, saying “Hey Vivi, how ’bout we play dis game?!” excitedly when Vivi gets home from school. She has been waiting, you see, for her #1 favorite playmate–I make an okay secondary partner, I suppose.

Candy Land has made its way to the top of the chart on game night, and I only grit my teeth a little bit because at least it’s fast. Plus, the way they squeal when they turn up a candy picture card, that’s worth a bit of nonsense. Luckily we haven’t had to endure Shoots and Ladders yet, but I’m also betting age 5 is a big year for board games. Do y’all have board games you like (or more likely, tolerate)? Vivi seems alarmingly good at checkers for her age, and I am past pretending I’m letting her win and on to bringing my A game.

…What this makes you think of me, I can only imagine…

Vivi asks all manner of interesting questions lately. Like, this morning she felt her head and asked if there were multiple bones in her skull. We had discussed that her brain was protected by her skull bone, but I hadn’t specified how the skull was formed (why would I, right?). She felt around and noticed that it seemed like there was more than one bone. What were the bones called, she wondered. Nate and I are normally convinced the other one put such notions in her head, only to find out later after drilling each other that she comes up with them on her own. Smartypants! Do your young’ns do this?

She also routinely drills me on the variety of names for her teeth, wanting to be sure she gets the specific tooth right when she informs me that “an incisor is loose.” My little scientist. Of course, then in the same blink of a moment, she will wipe a booger on the window or put her shoe on the wrong foot, and I am ushered back into the reality of her four-year-old self. But man, those glimpses of what she will be some day. They are powerful, you know?

After the last picture I posted and then when you see this next photo, you might think all I do is let the kids watch TV. I swear, there is only a tiny part of me that wants to correct this possible line of thought. Do please let the record show that Charlie hand-picked her own stripy outfit (right down to the tights). 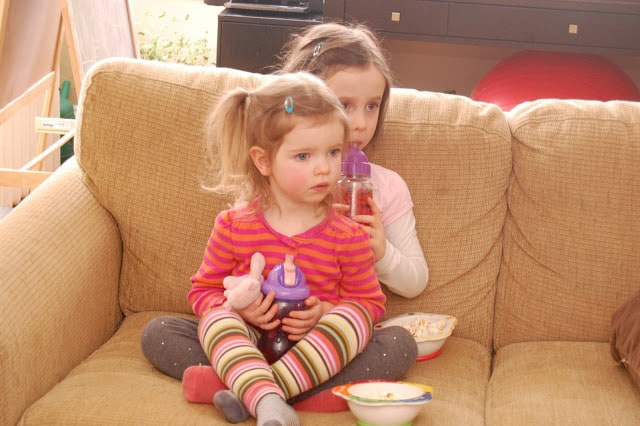