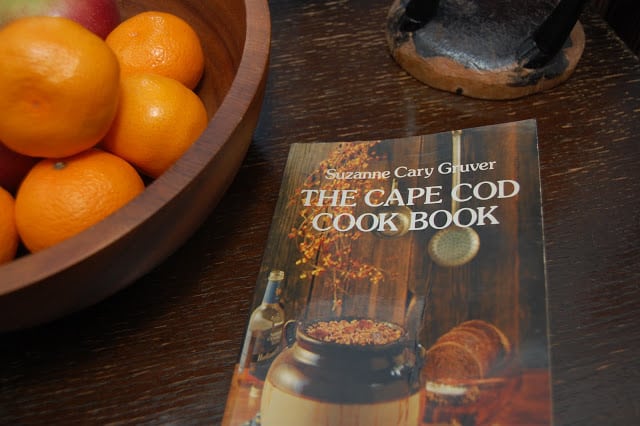 Do you browse the “books for a quarter” section of your library? I take a frequent peek because I often find interesting books I wouldn’t have found any other way. That was the case when I picked up Suzanne Cary Gruvner’s “The Cape Cod Cookbook,” a 1977 reprint of a book originally published in 1930. If you know of my love of heirloom recipes, you can imagine my delight at finding this treasure of New England history. Others might look at such a scrappy small book and think I’m nuts, but there it is.
I must have gotten myself the perfect mate because Nate loves the book as much as I do. I’ve been hanging onto it in a closet until winter came around, feeling that most Massachusetts recipes seem well tailored for cold weather.I can’t imagine why (winky face)…There are so many intriguing and sometimes comical recipes in the book. We love the idea of making their oyster stuffing the next time we have turkey, but I can’t see myself making “emergency fish pie” any time soon. Quick, I need some fish pie, STAT! 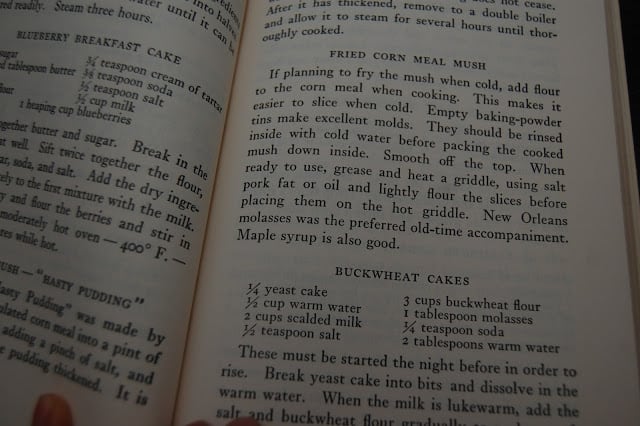 Fried corn meal mush, anyone?
One of the interesting and somewhat sad features of this book is how frequently a seafood dish is present. You can tell from the quality of the ingredients listed that it was not supposed to be a fancy or expensive collection, and yet a whole cod, lobster, or handfuls of clams and scallops make regular appearances. I probably don’t even need to mention the closing up of our local seafood shop to make the point that times have changed tremendously since then. Overfishing and the adverse environmental conditions (i.e. water temperature)  have created the previously unimaginable scenario in which we can raise large fowl that need to be fed and cared for cheaper and more sustainably than we can grab a fish out of the ocean.

The book notes that Atlantic cod, “the insignia of Massachusetts,” used to be called “The Cape Cod Turkey.” I’d wager these days that turkey is now the Cape Cod Turkey. Turning the tides of this post to a happier note, I’m looking forward to making fish chowder as a special dish over the Christmas holiday. But not just any fish chowdah. According to the book, this recipe is Daniel Webster’s fish chowder. For those of you as bad at history as me, I’ll remind you that he was a great orator, statesman, and senator from Massachusetts who, among other notable moments in history, attempted unsuccessfully to prevent the Civil War. Here’s my favorite of his many famous quotes:

“Let us not forget that the cultivation of the earth is the most important labor of man. When tillage begins, other arts will follow. The farmers, therefore, are the founders of civilization.”
Amen, brother. Even though I haven’t made his recipe yet, I can’t see how it could go wrong. A fish, some pork belly, and potatoes? Sign me up!

The book uses his actual verbatim recipe, written out in a few paragraphs, but as it includes such vexing antiquated phrases as “try out the (raw) pork first” (which means brown it, not eat it), I’ve adapted it into modern recipe verbiage. I also substituted the “hard crackers” of yore (i.e. hardtack or sea biscuits) with crackers you can find on shelves today and cut down the original gargantuan recipe size that would have fed 20+ people (A 10 pound Atlantic cod? Oh sure, I’ll just go down to the local fishmonger. Not.).

As I mentioned above, Atlantic cod is no longer sustainable, so we are planning to substitute Pacific cod. Not local, but in this case, local is not at all important to us compared to sustainability (i.e. abundance and farming/catching methods). I’ve written about Pacific cod before.

Cut fish into 1/2 lb. pieces, preserving head whole. In a Dutch oven, brown the salt pork slices over medium heat and remove to a plate, leaving drippings in the pot. Add onions and saute until tender. Add a layer of fish to cover the bottom of the pot, then a layer of potatoes, the salt, pepper, bay, and pork, another layer of fish and the remaining potatoes, and cover with water.

Allow chowder to boil for 25 minutes. Meanwhile, heat milk until almost boiling. Add milk and crackers to chowder. According to Webster, at this point “the chowder is ready and will be first-rate if you have followed the directions.” So there.