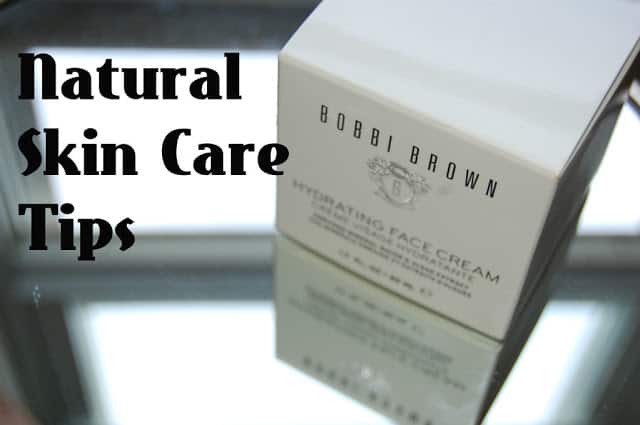 I’ll get to the tips in a moment, but first I have to tell you what led me to ponder this subject in the first place, when it’s so out of my typical element. Stick with me–we’re going somewhere. During my girly weekend, I happened upon the Bobbi Brown makeup counter in a Lord & Taylor department store. How I wound up there is in itself a small novel.

We were at Lord & Taylor to find Laid-Back Mom a new mascara. She has ridiculously amazing eyelashes already so has never needed mascara in the past, but now for unknown reasons (pregnancy? age?) her lashes are turning blond. Ever the dutiful pal, I acted as her wing-woman and supported her on the journey into the wild unknown of the beauty department. Neither of us have experience in this area, so we traipsed incompetently around at first before casually pausing at Clinique, with whom we had each had a brief affair in our awkward teen years.

The Clinique woman pounced immediately, and after LBM quickly explained what she was looking for, the lady swooped her unwillingly off to her bar stool for a make-up lesson. This would be the first of three such involuntary makeupings we experienced that day. But I am getting ahead of myself.

After drowning her in foundation and concealer and the world’s most gaudy mascara, the misguided lady (who BTW was wearing blue eye shadow and bright pink rouge) finally let her up for air. When she turned to me to get my opinion, it was all I could do not to ROFL or LOL or LMFAO or whatever the kids are doing these days. Instead, I forced myself to make a quick head shake, and I led her away to find help somewhere else.

Next we stopped at Estee Lauder, which we both had a sense that our moms or grandmas might like or use on occasion. Although the make-up lady produced no better results with her vampy mascara, she at least made a good effort to gather the expertise of others, which is how we happened upon the fantastic man at the Bobbi Brown counter. I had a vague memory of reading a book my mom had of hers when I was an impressionable college student, and I’ll never forget her advice about skin care. At that point I had all but given up that I would ever have good skin, but I remember her saying that being in good general health and drinking lots of water is as if not more important as what you put on your face to look pretty. For me that was step #1 toward a life without make-up. But I digress.

This brilliant make-up artist produced a perfect mascara in a matter of milliseconds and then moved on to a perfect lip gloss. He heard we weren’t into the hardcore stuff and kindly acquiesced to leaving the smelly, heavy glop out of the conversation entirely. He led her through some of their products that she might like that make you feel like you’re not overly made up. I could see she was thoroughly enjoying the pampering. What a difference this experience was.

Somehow it came up while he was showing her a way to moisturize her face (with water spray! so interesting) that I–hehem–don’t have a face soap at home. In fact, if I wash my face at all it’s with Dr. Bronner’s peppermint soap. There was a long pause, and I wondered for a moment if he was going to speak to me at all after that. But he did (and attentively, I might add) and took that opportunity to whisk me into a chair. I had inadvertently wound up on my turn, but he was so agreeable that I didn’t mind.

The first thing he said is “If you buy nothing else for the rest of your life, go get yourself an eye cream.” I hung my head slightly because I knew how right he was. Lately I’ve been getting the alternating sunken eye, puffy eye look, and I had no idea what to do to remedy it. But at $70 a tube, I also knew I wouldn’t be buying Bobbi Brown’s eye cream (I’ll come to what I did buy later on down the page). I was running low on my fancy Clinique moisturizer, so I decided I enjoyed his presentation so much that I wanted to give him business and bought a new Bobbi Brown face cream. I like that you can use it night or day, and it doesn’t have a funky smell or texture.

This is a completely unsolicited review and one I feel I just have to make based on how much fun we had there: I highly recommend going to a Bobbi Brown counter and getting a free lesson. She is a make-up genius and after a remarkable career in the field has created some excellent products. This advice is even coming from someone who never wears make-up (and still didn’t buy any that day)–if you’re like me, they can help you too in ways you might never have thought you wanted or needed help. FYI, they are against animal testing too.

I came home that day feeling conflicted about my no-fuss routine. While I didn’t want to add a lot of unnatural products to my repertoire, I recognized what he was saying was true: my face was a bit of a mess. Patchy, dry, oily, puffy. I made up my mind that day once and for all to give the oil cleansing method a try. I learned about it months ago from Crunchy Betty and Sorta Crunchy (thanks ladies!) but had refused to try it because it sounded…well, gross. The thing is, it’s not! 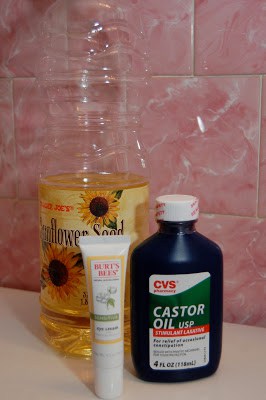 Allow me to start by saying I realize how utterly odd what I’m about to tell you is. I haven’t gone so far down the crunchy path that I’m thinking “Cleaning my face with oil? Right on!” Nothing could be further from the truth. When you’re planning to wash your face with a product that says “STIMULANT LAXATIVE” in big bold letters, you must pause and admit to yourself that you’re not embarking on a plan that involves sunshine and rainbows.

The biggest positive aside from being natural is that it is simple. The two ingredients in the oil cleansing method are equal parts castor oil, which provides the cleansing, and a carrier oil like sunflower, which keeps your face from drying out (I know, it sounds weird that your face could dry out after slathering it with oil. I don’t get it either). I won’t rewrite the book on the subject, but I will add two tidbits:

The day I went to the drug store to pick up castor oil, I also visited the skin care section and noticed Burt’s Bees has come out with some new stuff, specifically a sensitive skin line. Sweet! I love their products, but I find most face stuff by any drug store company to be harsh on my skin. I grabbed a tube of Burt’s Bees sensitive eye cream ($14, now we’re talkin’) and have loved it so far. It’s hard for me even to believe this, but I truly have noticed a difference after only a week of using it.

Tell me, do you have any quirky beauty secrets that leave you feeling pretty but still natural?