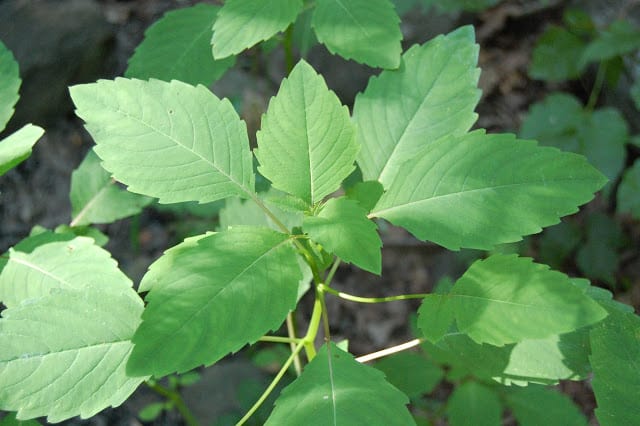 I have been using jewel weed to treat poison ivy since I was a child. I learned about the plant at summer camp as a Native American folk remedy, and it quickly became one of my favorite plants to identify because of its tell-tale leaves that look silver when placed in water. 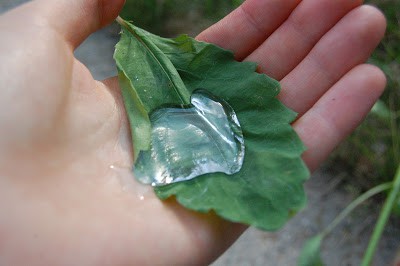 I looked into jewel weed online when researching for this post, and it was very interesting to learn more about the plant. Jewel weed, or jewelweed, is in the Impatiens family (Impatiens biflora to be exact), and when flowering they are called “touch-me-nots” because their seed pods explode when touched. I have never actually seen a flowering jewel weed plant, but then I also usually look for it in summer rather than spring. I’ll be on the look-out next spring to see if I can find an exploding pod in action.

Jewel weed can be found all over North America. It typically grows in some of the same places you find poison ivy (i.e. in wooded areas) and always in moist soil or close to a water source, if not actually in the creek/swamp itself. It has a shallow root system, allowing for easy extraction. Take the whole plant, as you need the juice from the main stalk and will usually need at least one plant to get enough juice to treat the rash, called allergic contact dermatitis. According to traditional folklore, jewel weed can also be used to treat insect bites and eczema; I have no personal experience with these uses.

To apply jewel weed to your poison ivy reaction, cut a 3-4 inch piece of stem off the plant and slice it open (as though it was meant solely for this purpose, it is again very easy to do this part with your hands). You will notice it immediately begins oozing water-like liquid. Simply brush the plant over the rash. If you treat the rash as soon as you see the first bumps form, you will probably only need to use it once. If, however, you wait a few days (like I did with Charlotte’s rash, thinking it was diaper rash), you will need several applications over 1-4 days. 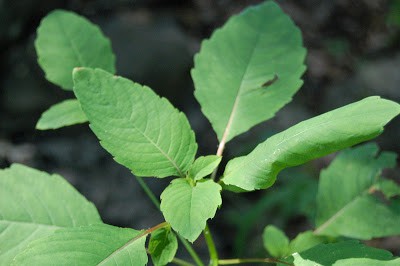 One of my most intriguing findings is that jewel weed has not proven effective in a few double-blind studies (see examples here and here). Being in the public health field, I typically look on such studies as the final word; however, I can assure you that when I personally have used jewel weed on myself and my kids, it works! With this latest use, I put it on Charlotte’s rash over one day, and the next day it was nearly gone. I left my camping trip that day and didn’t think I needed it any more since I had calamine lotion. Boy was I wrong. Within a few days, the rash was back with a vengeance, so I gathered more jewel weed at home. Just like before, one day’s application was all it took to appear much reduced in size.

Although I don’t know the details of the studies in question, I wonder if the researchers simply waited too long between opening the jewel weed plant and applying it to the rash. Some pointed to use of “jewel weed extract,” which sounds to me like they removed it and bottled it days before use. I never open the plant ahead of time, instead waiting until right at the moment I want to use it.

As I mentioned above, I tried using calamine lotion on Charlotte’s poison ivy too. I bought Caladryl because it contains Benedryl, but I since learned that the purported effects of calamine in treating poison ivy are disputed at best. Anecdotally, I can tell you it didn’t work a bit on Charlotte and actually seemed to make the rash worse.

Of course, the best way to treat poison ivy is to stay away from it in the first place! While I did put Charlotte in long pants on the particular hike in which I believe she contracted it, I forgot to change her immediately when we got home, meaning at each diaper change I was pulling her pants down and up again, exposing and re-exposing her to the oil that causes dermatitis. A nearly foolproof method of avoiding poison ivy is to either wash your exposed areas with cold hose water (no soap) after contact or change clothes if you were wearing long sleeves and pants. Good luck!