I invited some fabulous bloggers–and fellow home rangers–to write guest posts on The Lone Home Ranger for this entire week during Vivi’s Spring Break (called “April Vacation” in Beantown). These lovely ladies will be bringing you features focused on healthy, natural, and simple living. Enjoy!

Today’s post comes from Chandelle over at Chicken Tender. Be sure to read through to the bottom of the post to see her bio and link to her blog. I’ve also written a few of my own thoughts about her post.


(N.B.: This is a post about raising rabbits for food, so there is some minor discussion of animal slaughter). 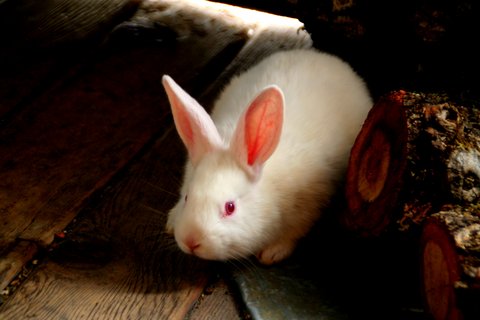 Several years ago, while living in a dumpy apartment in Salt Lake City and dreaming of greener pastures, I read the book Farm City, by Novella Carpenter. Pored over it, more like. Here was a lady without much money (like me), without land (like me), without a family history of farming (like me), who somehow got it into her head to be a farmer (also like me), and carried it out despite the obstacles, with a severe wit and a willingness to Dumpster-dive to feed her animals. (This last part was not like me, not yet.)

I passed this book on to my partner, Jeremy, with the proclamation, “You just have to read this.” He did, and what he took away from it was a desire to raise rabbits.

For years he pushed this idea, and I was resistant. I had other plans in mind, and rabbits seemed… less than glamorous. Every aspiring farmer I knew was raising chickens, not rabbits. Rabbits are pets, aren’t they? I had never eaten a rabbit and couldn’t imagine tanning a pelt. I was too recently a vegan to stomach either idea.

Every few months Jeremy would read off a Craigslist posting for rabbits or supplies and I’d “mm-hmm” my unspoken dissent. I realize now that I was uncertain we could carry out the entire process of raising a rabbit for meat. I thought we’d get attached. Unlike chickens, rabbits are mammals, like us, and they’re sweet and cuddly and fuzzy and adorable. I worried that we’d get a bunch of rabbits, they’d start reproducing, and we’d end up with too many animals and not enough willpower.

After we moved up the mountain and began our small-scale farming ventures, Jeremy got his rabbits. And over the past several months I’ve come to understand how important these animals can be for beginning farmers. In fact, I believe they can be even better than chickens, especially for small-scale or urban growers. Let me explain why.

CHICKENS VS. RABBITS: FOR FOOD

Chickens and rabbits both provide a significant source of protein, and both are suitable on a small-scale. Chickens have the benefit of providing eggs as well as meat, while rabbits only provide meat, but rabbits reproduce much faster and more efficiently than chickens. While a hen might go broody once or twice a year, and hatch out as many eggs as you can shove under her (usually around a dozen), a doe can bear a litter of 5-12 bunnies every two months. Depending on the breed, chickens are ready to eat between 8 and 15 weeks; my partner butchers his rabbits around 10 weeks.

But chickens require quite a lot of space to be happy. When I raised hens in a city backyard I witnessed first-hand how quickly they will decimate wild food sources if they can’t free-range or follow rotational grazing patterns. Within just a few months, every weed and blade of grass had been scratched away, and there wasn’t a snail or insect to be seen. As a result my hens became more dependent on store-bought feed, which increased their cost and degraded the quality of their eggs and meat. Not to mention that it was nearly impossible to raise a garden alongside my hens. A hungry hen can destroy a garden in less than an hour. Now that I have more space I can contain my girls behind poultry fencing, but they also have better resources for wild food, so they aren’t so desperate for something green.

Rabbits, on the other hand, can be raised in the space of a small porch. Domesticated breeds are sedentary, and seem to be content to laze around all day. If you place them in tractors on grass (not full-time, because they’ll dig underneath eventually), you can cut down significantly on their feed. But even if they are fully store-fed you will spend less money on feed than chickens, relative to the protein they provide. If you have only a very small space to raise animals for food – whether it’s a backyard or an apartment balcony – rabbits are far more efficient, and easier to keep healthy and happy.

My partner also reports that rabbits are easier to dress than chickens. Chickens require plucking – usually done by hand since mechanical pluckers are very expensive – and a bit of yanking and scraping to remove the organs. Jeremy slaughters his rabbits in the same manner as chickens, and says that their organs all but fall out after evisceration. Skinning rabbits is quite a bit easier then plucking chickens, and also less messy. And after tanning there’s a beautiful strip of rabbit fur for clothing or craft projects, whereas feathers just end up in the compost pile. 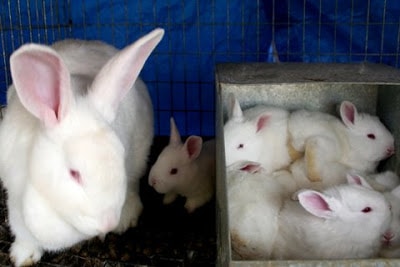 CHICKENS VS. RABBITS: FOR FERTILITY
Chickens and rabbits are both excellent resources for crop fertility. Commercial organic production is dependent on slaughterhouse byproducts such as manure, bloodmeal, bonemeal, and feathermeal, all of which are typically sourced from conventional CAFOs. For small-scale growers who want to raise a great deal of their own food with extra for their community, a closed-loop system is a worthy goal, so as to avoid dependence on CAFOs or fossil fuels. This means raising animals alongside crops to provide fertility along with plant-based compost.

Other slaughter byproducts, such as blood and bone, can be composted equally well in chickens or rabbits. But again, in terms of small-scale production rabbits are superior, because their manure can be used right away. (And just as an aside, rabbit manure is awfully nice to handle in comparison to chicken manure, being hard, dry, and scent-free.) 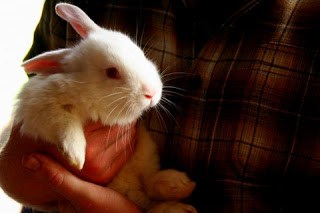 CHICKENS VS. RABBITS: FOR COMPANIONSHIP

In most parts of the world, rabbits are raised for food, not pets. The U.S. seems unique in its consideration of rabbits as companion animals. I become attached to animals very easily, so this is an important consideration for me. To my surprise, I’ve found that rabbits are not very companionable at all.

Rabbits, like chickens, can be quite vicious to one another. Chickens are omnivores, and they can and do kill and eat each other if given the right circumstances. If stressed they tend to peck each other to death, which is why their beaks are sliced off in CAFOs. Rabbits, although herbivores, are not much different. The does must be separated or they will kill each others’ offspring; the buck will also kill the babies, and if he’s too excitable in the company of a female, she’ll chew his balls off. Knowing this, I can’t see rabbits as cute or cuddly anymore. I think Beatrix Potter must never have met an actual rabbit.

If rabbits are not so sweet, they also are not very individualistic. I can’t tell one rabbit from another; they have no discernible personalities, so it’s virtually impossible to build an emotional connection with them. My hens, on the other hand, have lots of personality, and I love spending time with them. Even if they didn’t lay eggs, I would keep some around just for the entertainment value.

In this area I would consider chickens superior, but in all other ways, rabbits are what I’d recommend for any aspiring farmer itching for home-based protein provisions! 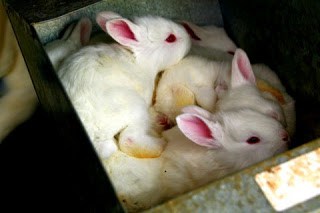 Chandelle lives in Mendocino County, California. She works in development at the Waldorf school where her partner, Jeremy, is a teacher. Together, they share the pleasures of parenting Isaiah (7) and Willow (5) while renting a one-room cabin on a 2500-acre ranch. They’re building a large garden and raising chickens and rabbits and soon, bees. They hope to add sheep to their repertoire in the next year or two, and maybe a milking goat. They have an 85-pound dog named Tuna, who likes to eat their chickens. She blogs at Chicken Tender


Editor’s note: This week’s theme is party about simple living, so you might ask why such an endeavor would be included in the series. I think Joy of Cheeky Moms Blog sums it up well when she says the simple live “is a choice that takes effort.” If you are interested in raising animals for food, you might also like the my buying and raising chickens post.


When I was a child, I kept a rabbit as a pet for a while. Although we called him “Honeybunny,” he was anything but sweet. He would run away if allowed out of his cage, and he became so aggressive after a while that he would bite or kick me if I tried to pet him. Nice pet, huh? Eventually I got tired of cleaning out his incredibly rank cage, so my dad kindly made him a pen in his back yard where he had more room to roam. His quality of life seemed poor though (in the far corner of the fenced area), so we gave him to my elementary school, where he was promptly eaten by a fox. Thus ended my short career in the “pets other than dogs and cats” arena. Seeing Chandelle’s pictures of the fuzzy bunnies, I’m not certain I could kill one myself, but I have no doubt she is right about their lack of companionability.