I was raised Catholic, and although we are no longer of the Catholic faith* and don’t participate in Lent, I still tend to abstain from meat on Good Friday out of a fondness for my childhood memories (ditto hot cross buns; I tried Pioneer Woman’s recipe this year). When we lived in Wisconsin, we adored the Friday fish fry tradition, which is held year-round as opposed to just during Lent. I miss Fried Fish Fridays! (or as they would say up there…”Do ya’ miss Fish Fridays at all?” “Yah, I miss ’em”).

I am lucky that my kids love fish, so I decided to try out a new healthier non-fried fish recipe yesterday. Trader Joe’s sells wild Alaskan cod pieces, which I usually cut up and make into homemade fish sticks (FYI, this is very easy to do. Mix Wondra/pastry flour with a pinch of salt in one bowl, and milk and a bit of malt vinegar in the other. Dip fish into milk first, then flour. Fry in 350 degF oil for 5-7 minutes until brown and crispy. I use our wok. Drain on paper towels). I’ve been wanting to try healthier cod recipes that my kids will enjoy, but it’s no easy task with how fishy cod tastes. Then I discovered a recipe, Black Cod with Caramelized Onions and Apples (scroll to page 3), in Bon Appetit’s Food Lovers’ Cleanse

Apples and fish? I admit I had never tasted the combination prior to yesterday and wasn’t sure how it would turn out. But all the BA recipes I’ve tried so far have been fantastic, so I kept the faith. I revamped the recipe to make it more kid-friendly. Verdict: According to Vivi, it’s “crazy good.” Who knows where she picked that phrase up. I happen to agree with her, even after the mild dumbing-down of flavors. If your kids aren’t into fish, I recommend easing them into this recipe with less-fishy-tasting tilapia or halibut (Note: tilapia will need less cooking time, while halibut is more costly) and giving them a dipping sauce. Vivi thought the onions were the best part, so you might have some luck given how sweet the caramelization makes them.

Before I get going on the recipe, I’ll comment quickly on the health benefits and sustainability of wild Alaskan cod, aka. black cod or sablefish. It is low in mercury and high in omega-3 acids, and less expensive than (let’s face it, prettier and better tasting) salmon, especially if you get the “cod pieces” I mentioned are sold at Trader Joe’s for $4/lb. (Although it says “pieces,” I find they are mostly nice-looking filets. I know not all of you have a TJ’s, but I’m betting grocery stores and fish markets sell them too). It is also frequently listed as a top sustainable option, such as on this Nourished Network list. In short, we should be eating more of this fish! 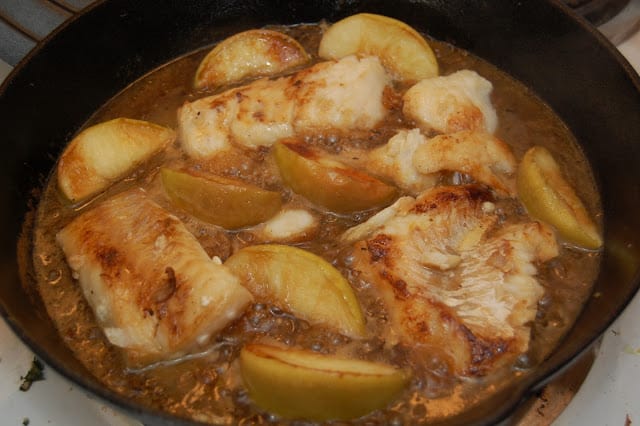 Caramelize your onions by cooking them in a few glugs of oil over medium heat in a cast iron skillet or Dutch oven for about 45 minutes. Stir often and pay attention that they don’t burn; if they start to look overly brown in parts but not yet done, add a bit of water, turn the heat down, and stir more often (I did this part the day before, while doing other weekly prep work, as a time-saver. I talk more about how to caramelize onions here). 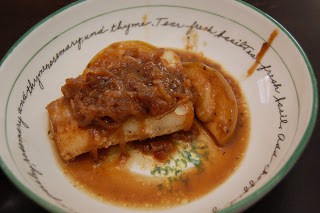 Remove onions to a plate. Prepare fish by laying over paper towels, dabbing dry, and sprinkling with salt. Add 1 Tbs. oil to a large skillet and brown apples on both sides over medium heat, 4-5 minutes per side. Remove to the plate. Add another Tbs. of oil and brown fish for about 5 minutes on one side. Remove to the plate. Add remaining liquids (water, cider, vinegar) and onions and bring to a boil. Reduce heat to medium-low and add fish (brown side up) and apples. Cover and cook about 5 minutes. Uncover, remove fish to a new plate, turn heat up to medium-high, and reduce sauce for about 3 minutes until it’s a saucier consistency. Plate up, you’re done!

*Note: We attend a Unitarian Universalist Church called First Church in Belmont, and we love it!

Editor’s note: This post is part of Freaky Friday, Fight Back Friday, and Sunday School