N.B.: My post title is an homage to Mike Birbiglia, one of my favorite comedians, and his bit called “Two-drink Mike.” Alternate titles I could have chosen are:

Lately I have been having a cocktail in the afternoon evening. And I’ve been baking more often. Would you like to know what happens when a mojito-filled, overconfident mom decides that coconut rum banana bread with lime glaze sounds so delicious that she just has to make it?

Disaster. That’s what. Prepare yourself… 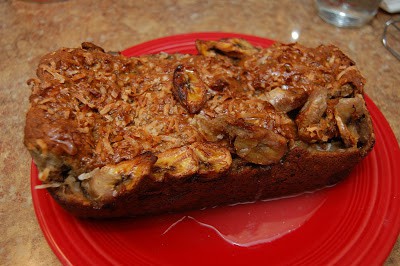 The picture honestly doesn’t do its ugliness justice. This bread is even worse-looking than it appears in the photo above and not much better tasting. Could the moral of this story be that I should not imbibe before baking? I also should probably not experiment with changing a recipe before I’ve tried it once the original way.

And in other news, there is still nothing to eat for breakfast!

For the most part, I am having a great time with the girls while Nate is on his trip. For the most part, I hold it together and keep up decorum and am the model of a civil parent. But for that small other part, I am a wild banshee. I am an untamed crazy-haired she-devil. I am the mom who unravels on the fourth time in a row I am asked “but WHY?”

In my defense, we’ve had some worse-than-usual health in the past few weeks. It all started about the time I decided to announce to the world that things were humming along smoothly. Why did I do that? Immediately after my proclamation, Vivi had an accident at the park that cost her a finger nail and me several years off my life from listening to her wail in pain without being able to do anything to help. Everyone is fine now, but if I suddenly show up with a head full of grays, you’ll know why. Then last week Charlotte got all four of her incisors at the same time, leading to much whining and general displeasure, and now both kids have a cold. I hate being “that girl” who discusses every hang nail and sniffle on the Interwebs, so I apologize for this rant into the aforementioned ailments. 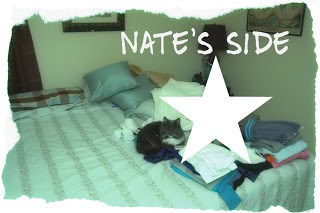 Usually you can guess how my day is going by how much sleep I’ve had, which is not as much as I’d like to be getting lately. I am not used to sleeping by myself for long periods, and I am not one of those people who relishes having the whole bed to myself (unless I am pregnant. Then I want two beds, a million pillows, and no sheets please. Thank you). I like it that although we have a king-size bed, Nate takes up 90% of it, and I am left to huddle in my tiny corner. That is what I’ve grown accustomed to, and though I may (and do) complain regularly to Nate that I have no space, I miss my lack of space when he’s gone. Too much space! Pigs…in…space! See photo on the right, in which I built up a pile of clothes and pillows to have something to bump into when I roll over in the middle of the night. A faux Nate, if you will.

I do wonder at times if Vivi picks up on my lack of sanity on certain days and exploits it–OR if this is just part of being a kid all the time, and I’m more sensitive to it on my raw days. I feel like I already know the answer to this question (that it’s the latter), but I can’t help but feel there’s a bit of a shell game going on around me. Which, as usual, reminds me of Crappy Pictures. She is the Willa Cather of frontier parenting, and I worship her spot-on commentary. Here’s an example of a recent conversation that I could have done without…

Me: I’m going to grab your clothes so you can get dressed.
Vivi: ME?
Me: Yes, you. You need to get ready for school.
Vivi: Charlotte?
Me: No, Charlotte is already dressed. I’m talking to you.
Vivi: Me?
Me: Kaboom! (that’s the sound of my head exploding

Another of my favorite comedians, Brian Regan, has a bit where he talks about the funny things he never thought he’d say before he had kids, like: “Buddy, don’t try to balance your fruit juice between your chest and the table.” Love it! Similarly, Design Mom introduced me to an artist who creates posters based on the odd things he says to his kids. And in that same vein, here are some things I have been known to say recently (all today, actually. All in the last hour, actually)…

I don’t know what kind of drink Batman likes best.

It’s better to ask “Please may I have a tissue?” than to shout “My boogies are falling into my mouth!”

And then, there are the noises. As I type, Vivi is currently humming a loop of one verse of The Little Mermaid soundtrack…off-key, of course. At least I’ve learned better than to ask why she is doing anything. There are usually the following two answers to this question: “I don’t know” or “Because I wanted to.” Neither of these answers will make me feel better, so I save myself the wasted breath and laugh it off. Someday, this will all be funny, I fool myself into thinking. 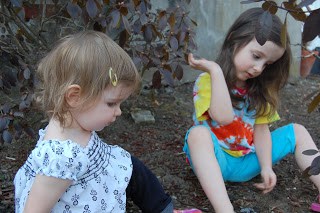 I’m so pleased my girls are developing a sisterly bond with each other. At a Harvard study on theory of mind this week–during which Charlotte and I were in a small room while she completed tasks, and Vivi was in another room playing with an assistant–Charlie kept reaching for the door saying “Viiiiiviiiii.” She was also quite the protector when we arrived at the hospital for Vivi’s playground injury, trying to place herself physically between Vivi and whatever staff was coming in to check on Vivi’s finger. It made for a few laughs in an otherwise harried situation.

On the flip side of the sisterly bond is the sisterly shrieking, which happens no less than 20 times a day. To the parents of two children: am I supposed to be breaking up fights or allowing them to work it out on their own? Telling them to work it out feels like I’m siding with the older kid since she can bully the younger one, but I also don’t want to baby my baby. I’d love to hear your thoughts on parenting siblings. I have no doubt Charlie will learn the word “tease” soon because of how often I scold Vivi for doing so. Other words Charlotte’s learned recently thanks to Vivi: Barbie, “alright, alright,” and “Ummm.” I’m sure it’s only the beginning of the teaching to come. On the other hand, she seems uninterested in learning new words from me.

The girls are very sweet and patient with me. I am humbled by the amount of grace they give me when I am ill-tempered, which makes it all the more embarrassing when I lose my cool. I am thankful they have each other, and I know some day they will talk behind my back about how crazy I am. I’m okay with that, because I am crazy, at least a small part of the time.
Yours, in parenting-induced insanity,~J