We are having glorious weather this week. Last year at this time we had definitely not broken out the shorts sleeves for a few weeks yet. We went to the park again yesterday and had such fun. On our walk, my mind was wandering to what I might write about today on the blog. I thought to myself “I haven’t posted Vivisms in a while. I should remember to write down the next funny thing she says.” Then literally twenty seconds later, Vivi nearly fell in the road and exclaimed “Oh! I almost tripped on that butt crack in the street!”

I died right there on the spot. I could not compose myself. I can barely keep it together now as I type. I know I’m not supposed to laugh in such toilet humor occasions, but the fact that I had both been thinking about what funny things she might say and that she would immediately hand me a sentence like that was just too much for my in-need-of-a-good-joke-because-I-haven’t-spoken-to-a-grown-person-in-hours mind. Besides, it was inadvertent toilet humor. The best kind!

Here’s the exchange that followed. It took me a few false starts to get going.

Me: Where-hee. Hehem. Where-haha! HeHEM. Where did you hear that
Vivi: Hear what?
Me: What you just said. Do you know what it means?
Vivi: Oh. I think a crack button is just something you can trip on in the street.
Me:  {quiet giggle} Ha…How did you hear it?
Vivi: Sometimes my friends use bathroom talk at school (her teachers’ phrase, not mine).
Me: Oh? And then what happens?
Vivi: My teachers get sad, and they put my friends in timeout.
Me: Have you ever been in timeout for using bathroom talk?
Vivi: No, I usually just don’t stop talking and playing. 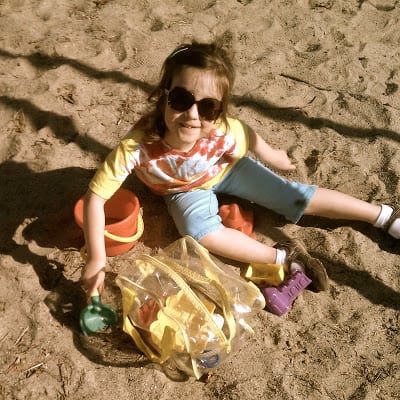 When we arrived at the park, we began making sand castles, and I demonstrated how to dig until she hit wet sand. I love that one of our shovels is a big clam shell we brought home from a trip to Crane Beach last summer. Meanwhile, two teenage girls arrived to the park and began to swing. I’d say they were roughly seventeen based on their topics of conversation. I began to passively take in their convo, and I was amazed at the maturity I heard when a discussion of boys came up.

Girl A: I want him to pay attention to me, but I don’t know how to go about it without making a fool out of myself.
Girl B: What you need to do is figure out where his interests lie, find a point of attraction for you, and talk to him about those subjects. After all, it’s in the coming together of mutual activities that our relationships really bloom. Don’t you think?

I am not embellishing her words. I was stunned. I can’t say for sure what I knew on the topic of love at seventeen, but I’m pretty whatever notions I had were nowhere near this sophisticated. It was more like “I wonder if he likes pizza. I like pizza. Maybe we can eat pizza together.” But I had no idea what I was doing. The thing about being in my thirties is that I am more likely to share something in common with someone in their fifties than I am a teenager. My teen compass has been obscured by having my own children, to the point where all I can think when I heard this girl speak was “Is it a good thing for her to be this mature, or not? Are all girls this mature now?”

It’s actually a frequent occurrence for teens to show up at this park. There’s another more lovely, better maintained park nearby in the woods, and most of the moms take their children there. I let Vivi decide where we go, and this week she’s chosen the other park for its superior sand pit. It really is almost just one large sandbox with a few random broken plastic toys scattered about. My hunch as to why teens hang there is that not only are their fewer young moms like myself, but the playground equipment is from a bygone era. I’m actually quite surprised the powers that be haven’t swung by to collect it all. The monkey bars are one giant cage that rises about 20 feet in the air, and the slide is a rickety, dinged up, old metal contraption that heats to an ungodly temperature in the summer. It makes me nostalgic for the playgrounds of my youth, back when we had seesaws and merry-go-rounds of death. Those were the days.

Are you having great weather this week too? What are you getting out to do?

Editor’s note: This post is part of Wordful Wednesday