AnnaLysa is my best good friend. She calls me Bean. I call her Annie, because let’s be honest, she’s more creative than me. She is brilliant, in fact. She befriended me when we were four years old, and I was shier than a baby turtle. She brought me out of my shell and continued to coax me patiently back out every time we encountered a scary milestone (middle school…ack! high school…eek! prom…barf!). Speaking of prom, she was the prom queen. I tell everyone we meet that little nugget. There never was a more deserving person on this earth of that award. She is an exceptional person, and should you ever meet her in person I know you will agree. I owe the fact that I give hugs and compliments to my many years spent modeling her. She does not betray an ounce of judgment or fear across her face when meeting a person who is disfigured or handicapped in some way, and I truly believe it’s because she feels no judgment or fear. 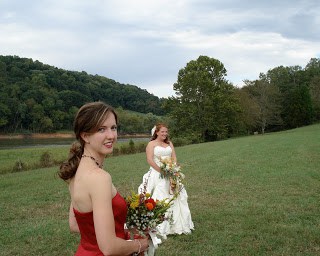 Annie’s wedding on her grandmother’s farm in TNWhen we were sophomores in college, she decided to transfer out of state to New Mexico. I sobbed in her driveway the day she left. I may have chased the car down the street. Little could I have known that day that I would be the one to leave Georgia for good, and she would be the one to come home for good. Two years later I flew out to Albuquerque to see her graduate, and we had a blast. Her great aunt lived out there, and she threw a fabulous celebration dinner for Annie. She served a classic New Mexican dish called calabacitas. The translation depends on who you ask; some say it’s the name of a specific small, round squash, others say it simply means “little squashes” in Spanish. I had never much cared for squash or zucchini even when I had succotash, the southern equivalent of calabacitas (usually squash, lima beans, corn, red pepper), but this meal transformed the veggies for me. I’ve since developed a taste for zucchini to the point that I will eat a broiled zucchini with just salt, pepper, and a drizzle of olive oil.

I’m so happy to have a dish that reminds me of my bestie every time I make it. Nate loves calabacitas as much as I do, and in the summer months it is our weekly side dish staple. We also love it inside black bean and avocado burritos. My mouth is watering right now as I type. The crunch and sweetness of the corn pairs nicely with the softness of the squash and the heat of the jalepeno. The dish is different every time I make it, but one thing remains the same time after time: LOTS of butter. This template is a canvas that molds to the artist/chef; I encourage you to change it up and make it your own. And do let me know where your creativity leads you!

*Note: If you have a pepper handy that is native to New Mexico, by all means use it. Our favorite is the hatch chile. Nate bought a giant bag while there some time ago, and we’re still feasting on its bounty.