We are dreadfully lazy over here. It’s actually more like I am lazy, but I like the sound of “we” better. The hubs is potentially flying to 7 different locations in the next few months, 1 of them international, so I guess I should leave him out of it. Like I was saying, I am dreadfully lazy. Yesterday was foggy for me. Even though lil’ C slept through the night, I felt like I had been at a rave until the wee hours, proving my insomniac mom is right that the second day after no-sleep is worse.


After shuttling the tiny humans to school and nap, I attended to my morning habit of tea and trail mix–lately Bengal spice tea and breakfast cookies–which I started while living in the UK. Back then, I was very discouraged to learn Brits don’t actually eat crumpets on a daily basis; usually it’s just an ordinary snack food like a bag of “crisps.” Do you make trail mix? I mix up whatever I’ve got on hand, but my general parameters suggest the inclusion of salt, chocolate, tart, and crunch. This week’s includes deluxe mixed nuts from TJ’s, pretzels, chocolate chips, dried cranberries, a few dark chocolate-covered almonds (TJ’s again), and cheerios and peanut butter puffs for filler/crunch. 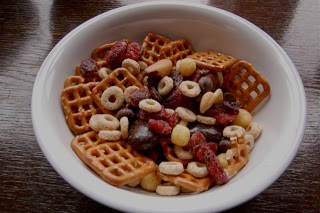 While noshing, I did a bit of blogging about blogging and added a new ritual to my routine: stare at the kitty loafing next to me and zone out. 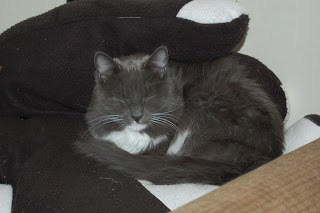 I snapped back with it when Charlie awoke at 11:40, which is about the time I realized that I had to leave in five minutes, and not only had I not packed Vivi’s swim bag for her upcoming lesson, but I also hadn’t packed us a lunch. A couple of corn muffins and two squirtable yogurts and carrot-apple-sauces later, I was good to go. I am nothing if not the model of responsible parenting.

I’m lucky I made so many soups last week, for now I can sit back and reap my bounty. Last night I took Roving Lemon’s suggestion and made a couple of one-egg omelets and some biscuits to serve alongside. Nate loved them and was impressed with my ability to gather useful knowledge from the interwebs. So I’ve got that going for me.

How goes it on your end? Do you keep your ducks in a row? Mine are a touch unruly.