A blogger friend wrote a comment a few days ago reminding me of a scene from Monty Python’s Life of Brian–love that movie! Watching it again got me thinking about religion and humor. The movie was apparently controversial on its release; it was made the year I was born so I wouldn’t know, but so I’ve heard. Getting up in arms about religious satire is a strange phenomenon. From my perspective, it seems only natural to poke fun at your own faith, just as you would any other area of life, or other faiths for that matter (remember a certain Danish cartoon, anyone?).

It’s been necessary for me to hone this point-of-view lately, since Vivi has started making jokes about everything in her life, including her spirituality. The jokes aren’t very good; most of them only she gets, but she laughs hysterically every time. I find myself unsure about whether to let her make the ones about God and Jesus (see: Cheez-its), but as I said, it seems to me a little levity couldn’t hurt. Here’s another recent example of a Vivi joke:

Hopefully she won’t offend anyone in the process of joke-telling. She hasn’t as of yet even figured out the word “offend,” so I probably have some time before I need to begin explaining. I can only hope other adults are as understanding about her desire to laugh about her world as I am. Here are some other non-religious recent Vivisms:

If you’re in the market for a tiny bounty hunter….
Vivi: Mommy, I am eating Daddy’s enemies, and they taste good.
Me: Ha! Excuse me? I don’t think that’s the word you were looking for.
Vivi: What are Daddy’s favorite candies?
Me: Ohhhh, you meant M&Ms.
Vivi: That’s right, I’m eating Daddy’s M&Ms.

Vivi: Listen to this, Mommy, it’s a really funny joke I just did.
Me: Ok, I’m listening.
Vivi: Daddy’s works during the week, and I don’t see him. I see him on the weekend, so it’s “SaturDaddy.” Haha!

Sometimes there are no words…
Vivi: Daddy, watch how run I can fast! It makes my poop going on.

Vivi: Ow! I bumped into the door, and my soldier hurts.

Glad we got that straightened out…
Vivi: Mommy, where’s my kangaroo song?
Me: Pardon?
Vivi: You know, the blue thing that says “Oooooooo” when I blow on it.
Me: Oh, your kazoo! I have no idea where it is. 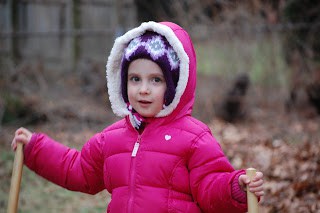