When I was growing up, there were legendary stories about my great grandparents. Cubby and Grandma, as they were known to most of us, raised eight children through the Great Depression and lived to be 98 and 92 years old respectively, outliving four of their eight children. Can you imagine? Cubby passed on when I was seven years old, so I have a few cherished memories of my days spent in Miami with him, throwing a ball for the dog in the yard or guessing in which hand a dollar, soon to be a gift for me, was hidden.

When someone would cut up a cantaloupe, he’d say “Your mother said we had to get married,” and pause long enough for family to think he was about to reveal a shocking secret before then saying, “because she said we CANT-ELOPE.” He was always saying amusing things like that.

Everyone called him Cubby, even his own children in his later years; in fact, I was in high school before I somehow finally learned his given name was Cloyde. Grandma’s name was Elizabeth Anna, and she went by Elizabeth (that is, before she became “Grandma”). Cubby was the only one who called her “Annie,” and I always tear up when I think of them being married for somewhere along the lines of seventy years, and him having a special nickname for her. True love, folks, true love.

Cubby was a great story-teller and had some fine experiences in his life to tell about; he created an estate furniture business all on his own and was able to sell it and retire at 45–this, after raising eight children, AND through the Depression no less (I know I said it already, but seriously!). He picked up his family in Maryland and moved them down to sunny Miami, Florida. Want to know his secret? F-R-U-G-A-L-I-T-Y. It’s the other lesser-known spice of life.

Years ago, my great uncle recorded a bunch of tapes of Cubby telling old stories about his childhood and working days. My dad painstakingly transcribed all of them into a huge volume that he then made copies of to give to our family; since then, he has done the same for his parents. The stories are all so wonderful, even more so because they are true, and reading my family history has become a favorite pastime of mine.

Great Grandma passed away when I was only two, so I don’t have any specific memories of her, but I have heard many lovely stories over the years from my grandmother and aunts. My favorite story comes from the Depression era. The family lived in Maryland at the time, and my grandmother remembers that Grandma would take in homeless wanderers for a meal on the back stoop; she would always give them a chore, like sweeping out the garage, because she felt it allowed them to keep their dignity that they had performed a service in return for food. To think of her goodwill and their hunger makes my heart ache and sing at the same time. What a lady. Her wisdom and humility give me compassion for those who are struggling in our current recession. 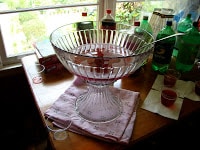 Great Grandma had a beautiful crystal punch bowl that was passed down to my aunt, from which punch was served to the guests at Vivi’s dedication ceremony. Family heirlooms like the punch bowl are great, but I wonder whether the heirloom recipes will survive along with the treasured tangible possessions. I hope so, which is why I’m sharing my great grandmother’s orange cake recipe, and why I’ve dedicated a section on my recipe page to my family’s heirloom recipes. My great aunt kept the orange cake recipe alive over the years; according to her, Grandma served this cake at a New Year’s Eve party she and Cubby hosted every year.

Image Credit: If you give a girl a cookie…