On Saturday morning we woke with a fire under our butts to DO something, since the weather report said the coming days were going to be f-f-f-freezing. [It did not lie. I am only really typing right now to stave off numbness in my fingers.] We considered going to Portsmouth, NH or Portland, ME; we’ve been to both places, but I haven’t been to either since we’ve lived here. They are both less than 2 hours away! New England is so small.

While we were considering what we’d do in Portland, Nate came across the Maine Narrow Gauge Railroad Museum’s Polar Express Christmas train trip. I am new to the world of The Polar Express. I didn’t have the book as a child and, although I’d heard about how wonderful it was, had never read it until getting it from the library this week. Heart-meltingly wonderful!

Going back to the train ride, the tickets were sold out for the day…and a bit expensive for the ROI at our kids’ ages. But oh, that reminds me of the best part! While reading the FAQ, I came across this little gem explaining whether the under-twos needed a ticket:

As long as your child can sit on your lap for the ride, they do not need a separate ticket.  Please note that children who do not have a ticket will not receive a bell, hot chocolate or a cookie.

And Santa will not look your kid in the eye.

Bhahahahaha! I am not making that up! Ok, I did make up that last line. Are we serious here, folks? How much could an extra cookie and bell cost, really?

We eventually opted to stay home for the day. I did want to let Vivi see Santa, but being the frugal, anti-mall-Santa type, I chose a little children’s bookstore in Concord [not far from the corner of Walden and Thoreau Streets. Adorable and quaint do not begin to describe the Concord experience]. Poor Charlie was having a high-fever reaction to her chicken pox vaccine, so Nate stayed home with her. 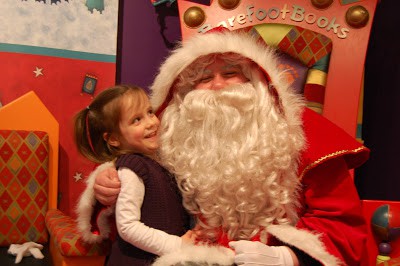 Vivi had an up-close and personal chat with Santa all about The Incredibles, her favorite movie, and about her favorite character in the movie, Violet. He was jolly and kind, the very best Santa we’ve seen next to last year’s giving of the cheese. I’m pretty sure that one will go down as the best ever. They both surely beat our first experience in the Georgetown Mall, in which Vivi did the traditional infant scream on Santa’s lap. 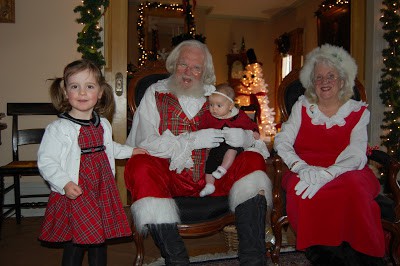 We spent Saturday evening drinking spirits, eating pizza, and chatting with my cousin and her husband, while Vivi and her cousin giggled and banged around upstairs in Vivi’s room. General ruckus aside, Vivi has never been easier to watch than at this age, where you can basically not only send her away but give her a toddler to entertain. 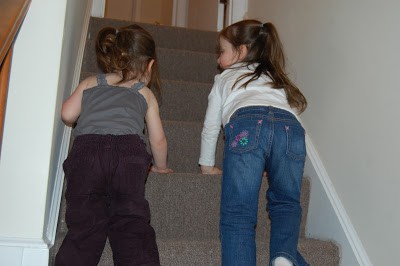 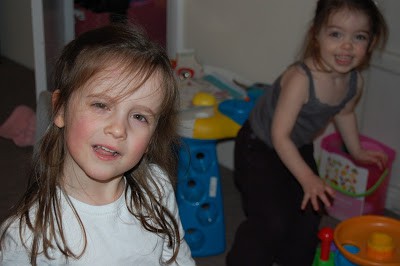 On Sunday we met up with my friend, Laid-back Mom, and her family at our local ice skating rink. They are from Canada, and I am not exaggerating when I say their younger son has been skating since he began walking four months ago. 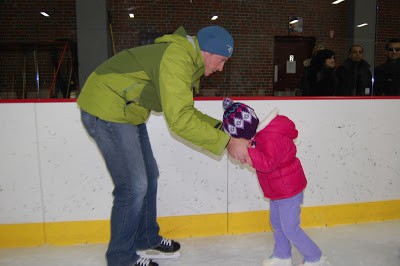 It was Nate’s first experience teaching Vivi to skate, and our friends helped him out a bit in getting her to go faster once she got comfortable. They were impressed with how quickly she picked up the sport and with her stamina.

Future figure skater? Doubt it; with my non-grace, Nate’s muscles, and her own bossiness, it seems to me hockey will be the sport for her. And it doesn’t hurt that the youth hockey league levels are called squirt, pee wee, and bantam. Cuteness! Charlie loved watching and was itching to walk out on the ice. Nate took her out for a round at the very end, and she beamed the whole length of the rink. My little northern baby! 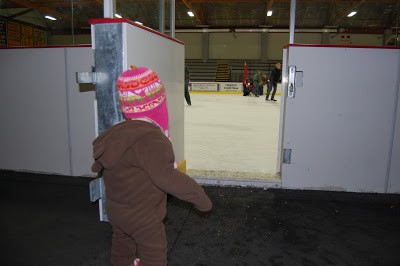 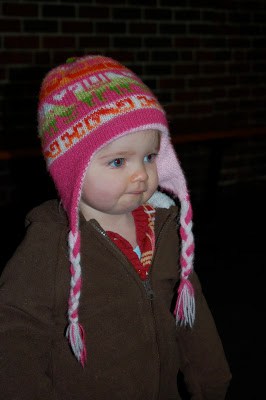 Hope you had a lovely weekend, friends. Ready for Christmas? We are counting the seconds!