Yesterday the girls were feeling crummy with a virus. Doc thinks it’s nothing serious, so the prescription is ice water, honey, and plenty of Pixar. Isn’t there something about Pixar films that just feels positive and wholesome? We watched Toy Story 3 and Robots back to back. Well, Vivi watched while Charlotte took the longest nap known to man, and I baked delicious Christmas treats, boxed them up, and still had time left to have a chat with the mailman while I handed them off to him.

Oh, and Robots isn’t actually Pixar, but it was cute! Though, I must add that in a non-Pixar children’s movie, there is typically an air of “We are making a joke RIGHT NOW. Get it?” going on, and this film is no exception. Still, worth a rent at the library.

In the afternoon, I left the house bra-less and pajama-clad (aka “honey-badgered”) to run into the post office two minutes before they closed, and then perhaps more appropriately, to bring my therapist her holiday goodies. Because if you can’t be a boob-swinging, striped-panted, half-crazed mess at your therapist’s office, then when can you, amirightladies? At least my therapist wasn’t in her office when I dropped them off, so I’ve got that going for me. Winning!

Tonight will undoubtedly end in another evening writing Christmas cards by the fire. In what could be called true home ranger fashion, I am the go-to fire maker in our household. It started with my ability to light a one-match fire when we were camping, thanks to all those pioneering summer camp classes, and it has continued to our first home equipped with a fireplace. Can you believe we’ve lived in something like 11 places in 10 years, and we only JUST got a home with a working fireplace? 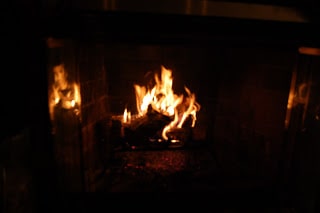 Anywhos, I am looking forward to the snuggling to come. Oh, and I’ll note that I first thought our kindling was called “Firelady’s Ambiance,” which I thought added to the kismet that I wear the fire pants ’round here. Then I noticed it’s actually “Fiready’s Ambiance,” without the L, which makes no sense. So, I plan to ignore that fact and go back to my original name for it. In conclusion, I must share with you the ridiculous photo on the side of said kindling. 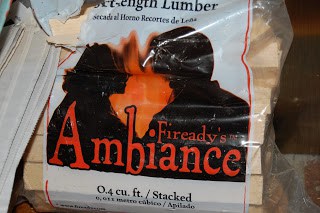 How’s that for some Firelady’s Ambiance?