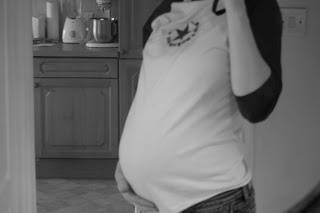 I gave birth naturally to both of my girls, and I’ve often been asked about their birth stories. I know I’ve already forgotten some of the details from Vivi’s birth that I didn’t write in her baby book, so I decided to tell her birth story on the blog. I know she will enjoy reading about it some day, and I also hope to inspire other women to try natural childbirth.

Nate and I were living in the UK when Vivi was born. He was on a temporary assignment with his job in US gov’t intelligence. I had just gotten my Master’s degree in public health and did not have a job, so I spent my time nesting, taking long country walks, drinking tea in our local shop, and making granola. What a paradise.

Even though I was not a citizen of the UK, I received excellent and free health benefits, which included weekly visits to my midwife and pregnancy classes with the other pregnant women in our little town, Oundle. We would all waddle together to the local tea shop after class was over to chat nervously and excitedly about our upcoming births. I grew so fond of these women, and it was a wonderful connection to the culture and people, who were difficult to get to know without such an easy conversation starter. 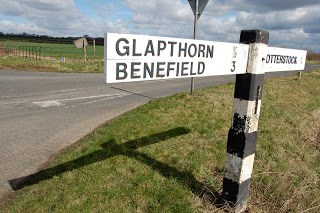 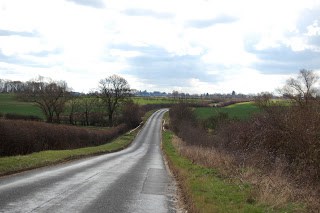 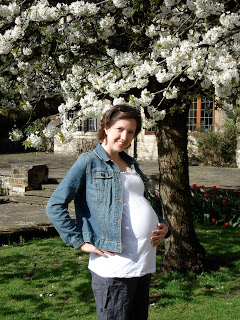 I drove to the train station to pick up my mom and her boyfriend. They flew to London from Atlanta and then bravely took the hour-plus-long train ride up to us. I had been working my way up to being able to drive long distances on the “wrong side of the road,” so I was proud to be able to pick them up by myself. I think they were both surprised by how big I was since they hadn’t seen me in four months. They were tired but glad to have arrived.

We were all so happy that even though we cut their arrival close to my due date, I had not gone into labor yet. I had some signs of pre-labor that day, so I barely slept with excited anticipation that Genevieve might be born the next day. 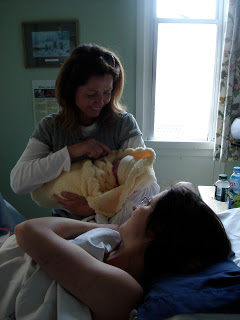 2:12 AM. I woke up and sat bold upright in bed, knowing that what I was feeling was a real contraction. I grabbed my stop watch, slid out of bed quietly and crept downstairs, enjoying the silent elation of being the only one to know what was happening for a few hours. Contractions started at about 7 minutes apart but quickly progressed to 5 minutes apart and lasted around 30 seconds each.

3:00 AM. I put the bags I planned to take with me to the hospital by the front door, and I checked and rechecked my packing lists. I sat down on my balance ball in front of the computer to burn my CDs of labor music and noticed that our friend David and my Uncle Joe were both online, so I chatted with them for a few minutes. It was strange that for a few hours the only two people who knew I was in labor besides me were thousands of miles away! 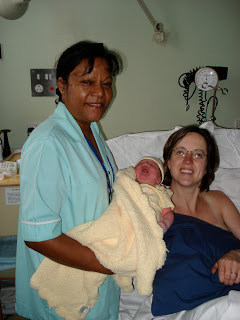 5:00 AM. Labor was in full swing with contractions four minutes apart and lasting anywhere from 30 to 70 seconds. Having labored for three hours on my own, I was at the point where I decided I needed other people around to distract me and to call the hospital to let them know what was happening. I woke up Nate and then my mom, who hadn’t even been in the country for 24 hours yet. I can’t imagine what her jet lag must have been like at that point. If I had known we would be in the house for another three hours, I certainly wouldn’t have woken her so soon.

5:30 AM. Nate called the Hitchingbrooke Hospital labor ward and spoke with one of the midwives on duty to find out when we should come to the hospital. She asked to speak with me, and the first thing she said when I got on the phone was that if I could speak to her without having to stop talking during a contraction, then I wasn’t yet ready to come. I was a bit nervous about laboring at home by then but was committed to arriving at the hospital ready to give birth so I wouldn’t have to spend a lot of time laboring in an unfamiliar environment. 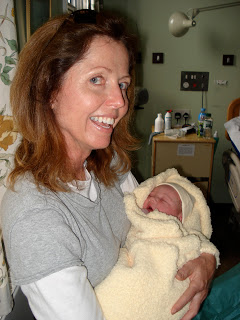 [Note: Most women in the UK begin the labor process with the idea that they will labor naturally and add medications as they see fit. UK hospitals have all the medications we offer in the US plus a few others we don’t. More on that later.]

6:30 AM. My memory of laboring in front of Mom, her boyfriend Kippy, and Nate was that the men sat on our smaller couch trying not to look like they were staring at me, and my mom rubbed my back constantly. I sat on my birthing ball and rocked in circles while I leaned on four pillows propped on the couch. Our cat Sally tried to sit on my head. I would ask Nate how long a contraction had gone on, and he would say “When did it start?” I could tell we had needed a trial run before the big day, but I let it go and started timing them myself. 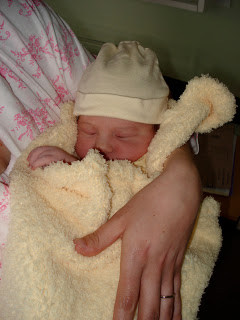 8:00 AM. We called the midwife again, and this time I couldn’t speak through contractions, so she gave us the green light to come on in. We piled into the car, and mom sat in the back with me while I was on all fours and spent the next forty minutes trying to find a comfortable position and cursing our rural lifestyle and choice of a hospital so far away. I asked seventy trillion times how long it would take and if we were there yet.

8:45 AM. We finally arrived at the hospital. Nate dropped us off out front so he could find a place to park, and I spent the following 20 muddled minutes trying to locate the labor ward in between incredibly painful contractions. We finally arrived to a bit of eye-rolling when I could barely think or speak from the pain. They handed me a cup and walked off, and I think that’s when I started to cry. My mom helped me with the cup situation and talked me off the ledge, and Nate attempted to persuade them that I was actually quite far along in my labor. 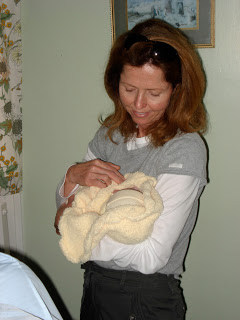 9:15 AM. I finally got checked into a room and assessed, and I could see the look of shock on my midwife’s face that I was 8 cm dilated! The nurse was apologetic that she hadn’t realized how far along I was; “You weren’t even screaming or carrying on at all!” I was so relieved that the pain I had been experiencing was not for nothing and felt a renewed sense of resolve that I could actually achieve a natural childbirth. I was offered a bit of what’s called “gas and air,” which is basically oxygen with a bit of nitrous oxide. It has been compared to having a cocktail; rather than taking away the pain, it basically takes away the nervousness and concern over the pain.

[Note: Unfortunately, the last time I checked when I was pregnant with Charlotte, gas and air is still not offered in the US. I cannot find an acceptable reason for this conspicuous absence with the exception that it can result in respiration trouble for infants. As that is also a potential side effect of Demerol and some other pain meds that are offered, I don’t think it’s a viable answer. My guess is that it could have something to do with the lack of infrastructure and the cost of installing the product being less than the benefit/return.]

9:45 AM. The gas and air lived up to the out-of-body experience promised, and I continued to labor through horrendous contractions but suddenly had something I could do during the contraction to take my mind off it. I think I might have said some weird stuff about monkeys. My mom was an endless outpouring of positive energy and support, continually reminding me of how well I was doing and that I could do it. If I hadn’t known she had given birth naturally to me, I’m not certain I would have found the strength within myself to do it. 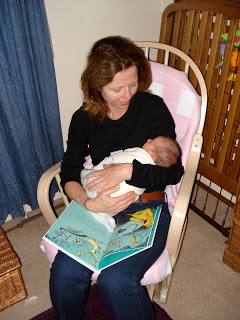 10:15 AM. It was somewhere around now when Nate went to get a sandwich and asked me between contractions if I cared if he ate it. I wouldn’t have cared if he had taken off his clothes and drenched himself in mayonnaise at that point and often make fun of him for asking about eating during my labor. He swears it was only his concern over my super sense of smell that prompted him to ask.

10:45 AM. I was assessed again and thrilled to be at 10 cm dilated and fully effaced. My midwife cut off the gas and air, and I got into my birthing position kneeling over the back of my bed. I found laying on my back unbearably painful, so I requested to be in that position as rarely as possible.

12:12 PM. Genevieve Jane was born after exactly 10 hours of labor. She looked so perfect with a lovely round head and ten chubby fingers and toes, and I couldn’t believe she was mine. To say it was all worth it would be such a huge understatement. I would have gone through days of labor to have such a wonderful gift at the end of all that hard work. 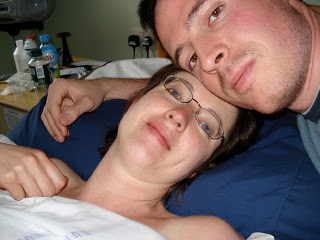 After an absolutely awful night of no sleep for either of us in a room full of seven other new moms and babies, we finally were picked up in the morning by Nate and my mom, who both had had to leave after visiting hours ended the evening before. I will never forget how breakable Vivi felt in our arms as we tried in vain to strap her in the car seat without her screaming. We were pushed aside by a capable and impatient nurse who told us we weren’t going to kill her by buckling her in. Looking back, all I can think is, “Welcome to parenthood. You have no idea what you are in for.” But I think it’s better that way. 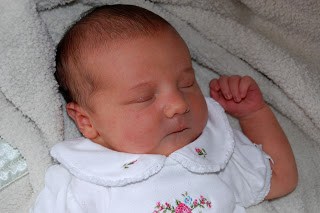 Update 2-9-12: I had to move this post to a new URL because I inadvertently included some personal information that I had to wipe from the old link. Also, when rereading this post, I realize I may not have portrayed Nate in the best light in my attempt to make a joke. I am so thankful to have chosen such a levelheaded mate; in every emotional or harried situation in our lives, Nate rises to the occasion and is a smooth operator, keeping me calm and making logical choices. I couldn’t have done either of my births without him and have fond memories of his contribution beyond sandwich questions.

Update 3-1-12: I am pleased to have been invited to share more of my birth story on another blog, which is dedicated solely to birth stories. I was more candid about the memories of the experience there than I was in this initial post. I am trying to learn how to be more honest in my own blog too.