…aka how NOT to bathe your cat…

I’ve always known him to be well groomed and to expect the same from me. Part of his appeal when we were courting was that he was the only 20-year-old guy I knew who used Pantene. Pantene! I was whisked away by the scents of a dewey meadow, and now here we sit ten years later philosophizing about the value of pets. To be clear, we were actually discussing whether or not we should keep our cat. To be even more clear, he was discussing, I was hysterically raving. If it had been a silent movie, you would have sensed how I was feeling.

So ok, some stuff happened in the middle. I’ll back up a bit. Recently we noticed our once perfectly coiffed, lovely gray cat has been getting rough around the edges. Like the nastyass honey badger, she just don’t care about cleaning herself. It’s as though she has suddenly decided to grow dreads on her back, which makes for some gross petting. What could we do? Well, we started by cutting off the problem, but that was no use, as though the cutting caused little baby dreads to spring up out of the stubs. It was not a pretty sight.

We chose to ignore the situation for a while, until this weekend’s cleaning fest. I really do wish my in-laws would visit more, both because I love seeing family and because an upcoming visit causes me to conduct a cleaning frenzy of the kind typically reserved only for selling your home. We’re talking under the radiator, behind the cleaning products under the sink, outside of the windows kind of scrubbing.

That’s when we got a tad overzealous. Looking around at our pristine home, I began to puff myself up, thinking I might just be a cleaning genius, one who could scrub even a cat until she shined like new. I even took pictures so I could photograph the great cat remodeling event of ’11. Although I hate to say it, I was wrong. WRONG. Do not try this at home. Don’t even think about it. There was much screaming (the cat and me), much combing, and some more cutting, and lots of fur flying about. And now? Now she resembles a sheep that’s been shorn by a drunk, blind shepherd.

Which brings us to what I learned about Nate. After the failed experiment, we were bemusedly sitting about, contemplating what had just happened and our own new-found cat-cleaning ineptitude. I won’t go into the details, but our conversation shifted into whether it was worth keeping an animal that’s still got her cool personality but is no longer her once-gorgeous self. I was surprised to learn we are of different minds on the subject.

Sufficed to say, I will continue to maintain myself with hair cuts and trips to the gym, because I see where this train could go if I’m not grooming on a regular basis. I’m kidding of course. In fact, I am the fortunate recipient of daily remarks on how beautiful he thinks I am, despite sometimes still wearing last night’s scrubby pjs in the afternoon and seriously needing to rethink how often I pluck my eyebrows. And make-up? What’s that?

So let’s recap. How to bathe your cat:

Because I love you all, I will leave you with a photo that makes me chuckle. Happy cleaning! 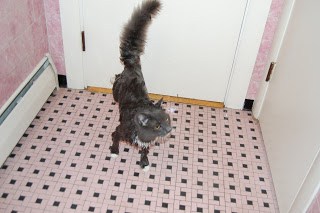