“Without contraries is no progression. Attraction and repulsion, reason and energy, love and hate, are necessary to human existence.” -William Blake 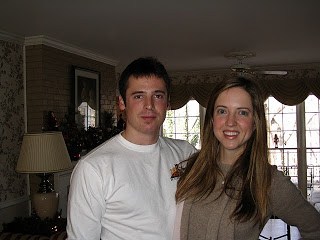 I think this might be our first digital picture together, taken by my aunt at my Grandma’s house on what I think was our first Christmas we spent together instead of at our separate parents’ houses. I can’t believe how young we look! July 12th was our 10-year dating anniversary. I’ve been thinking of what I wanted to write ever since the 12th, but I postponed writing until today because Nate is coming home tonight from his 2-week business trip to Costa Rica, and I didn’t want to think too much about how much I missed him, lest I spent the last two weeks in an even bigger pity party than I already was.

I like the quote above because it sums up my marriage so well. We certainly are yin and yang. He’s the Hermione to my Harry. And no, I didn’t get it backward, he’s definitely Hermione; questioning everything, grounded, unwaveringly logical, and more loyal to his friends than anyone I know. It’s a nerdy analogy, but what can I say, being nerds is probably part of what attracted us to each other.