By this time I’m probably well-known among friends and family for buying and eating only organic meat. We started with ground beef in 2003, and over the years as I’ve become well-read on the subject, we’ve extended our organic purchasing to all kinds of animal products (beef, poultry, pork, milk, eggs, etc.). There are many reasons we made this decision even in the face of rising grocery prices. Rather than discussing the animal treatment and sustainability reasons for our decision (more of which can be found in the books “Fast Food Nation” and “The Omnivore’s Dilemma” and the documentary “Food Inc.”), I am focusing today’s blog post on the safety factors.

I believe for many people baby steps are needed to begin transforming grocery habits. I don’t want anyone to think I’m judging you for the kind of food you buy, but I think it’s important that we all understand what is the food we eat. Unfortunately we cannot as of today trust the USDA to control the meat companies effectively, so we need to do our own research and make our own choices. To say we cannot change the way companies produce food is to underestimate the power of consumer demand.

If you haven’t heard of Jamie Oliver’s Food Revolution yet or seen his show on ABC, I highly recommend it. I especially appreciated a recent episode in which he covered the inclusion of “pink slime” in 70% of ground beef sold in America. What IS pink slime, aka ammoniated boneless lean beef trimmings

Pink slime is the intestines and other remainders left when butchering beef that was previously only included in dog and other animal food, but thanks to a process in which the beef is cleaned with ammonia (yes, that ammonia) to remove E.coli, we now consume.

More about the process can be found in a 2009 NY Times article. The ugly truth about American beef is that children are now routinely dying after eating ground beef, and it’s not just Jack-in-the-Box or McDonald’s to blame. Even grocery stores add pink slime to their ground beef. You can avoid pink slime by buying local or pre-packaged organic ground beef, or you can watch your butcher grind the meat in front of you.

To address the affordability issue, I’d like to point out that we now consume a giant amount of protein, way more than our bodies need and more than we ever have in the history of our country. While we do continue eat meat protein at least once a day in our household, we have begun to rely on other forms of the nutrient, such as nuts/nut butter, beans, avocado, fish, eggs, and yogurt/cheese, and some soy (mostly edamame). This diet allows us to save money and still eat healthily. I have begun to make Indian food, which I think is the most creative and delicious vegetarian food I’ve ever eaten. I still don’t have an Indian cookbook, so I’m currently relying on the Internet for recipes. If anyone has a recommendation on which book to get, I am listening!

Update (1/31/12): The Huffington Post reported McDonald’s and several other fast food chains have cut pink slime from their ground beef, which is a step in the right direction and one many believe (including yours truly) was spurred by Jamie Oliver’s efforts.

Editor’s Note: This post is a part of Fight Back Friday. 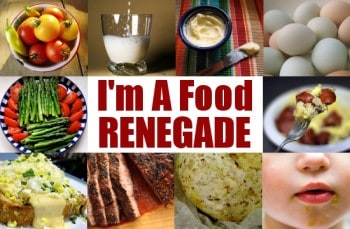