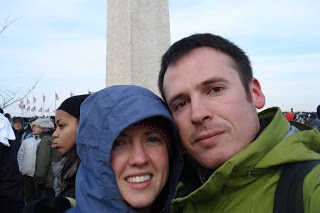 What a day. We had an amazing time today at the Inauguration. It was the place to be for sure and was a very moving (and verrrry cold) experience that we will remember forever. To me, President Obama’s speech seemed Kennedy-esque, and there were many tears and goosebumps. With the exception of the poorly-chosen boos in the crowd during former president Bush’s entrance, there was nothing I would change about the day…well, maybe the temperature. We biked into the city, one of many once-in-a-lifetime experiences. I don’t think I’ll ever bike down the middle of M Street in Georgetown again. When we arrived, we dropped them off with a free bike valet and only had a few more blocks to go. Because we had to take Genevieve to daycare at 7:30, we were pretty late getting to the mall and thus stood on the hill in front of the Washington Monument–but it actually ended up being a pretty good spot. I added a video at the bottom of the post. While he captured the mood well, Nate failed to put us in the scene. But you can hear me scream!

Here are my favorite moments in the address:

“We remain a young nation, but in the words of Scripture, the time has come to set aside childish things. The time has come to reaffirm our enduring spirit; to choose our better history; to carry forward that precious gift, that noble idea, passed on from generation to generation: the God-given promise that all are equal, all are free, and all deserve a chance to pursue their full measure of happiness.”

“Starting today, we must pick ourselves up, dust ourselves off, and begin again the work of remaking America.”

“The question we ask today is not whether our government is too big or too small, but whether it works – whether it helps families find jobs at a decent wage, care they can afford, a retirement that is dignified. Where the answer is yes, we intend to move forward. Where the answer is no, programs will end. And those of us who manage the public’s dollars will be held to account – to spend wisely, reform bad habits, and do our business in the light of day – because only then can we restore the vital trust between a people and their government.”

“We reject as false the choice between our safety and our ideals. Our Founding Fathers, faced with perils we can scarcely imagine, drafted a charter to assure the rule of law and the rights of man, a charter expanded by the blood of generations. Those ideals still light the world, and we will not give them up for expedience’s sake.”

And my favorite moment of all…
” To the Muslim world, we seek a new way forward, based on mutual interest and mutual respect. To those leaders around the globe who seek to sow conflict, or blame their society’s ills on the West – know that your people will judge you on what you can build, not what you destroy. To those who cling to power through corruption and deceit and the silencing of dissent, know that you are on the wrong side of history; but that we will extend a hand if you are willing to unclench your fist.”