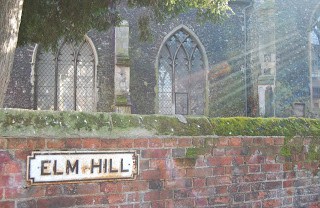 We went on a few day trips during the 4-day weekend (Nate had both Friday and Monday off) instead of one longer trip to Stonehenge because we’re trying to save money. On Saturday we traveled to Stratford-upon-Avon, where we took a tour put on by a local actor of Shakespeare’s life. Because of the freezing cold weather at 10:30am (and apparently some troubles with advertising), we were the only 2 on the tour! It was nice to have our own private guide. Stratford was very chic and full of people out enjoying the sun, despite the very cold temperature. After the 2-hour stroll around town, we stopped for a long pub lunch to relax and warm up my feet. Next we drove to Warwick, which was close by and has one of the best castles in the country. However, because someone purchased it to make it profitable and tourist-friendly, it had an incredibly steep admission price of nearly $40/person. So instead we wandered the grounds to appreciate the enormous cedar trees and found a peacock along the way.
It was still cold on Sunday, and I haven’t been sleeping very well lately, so we decided to take it easy. We took a stroll at a nearby park (along with half the town it seemed), and then we saw “There Will Be Blood” in the afternoon. Yesterday we were back on the road, this time to an eastern town called Norwich (“Norrich”). We were under the impression all of east England would be like our area, very flat and full of sheep farms. We were pleasantly surprised to find entire forests of trees (!), and Norwich itself was quite hilly. University of East Anglia is here, so the college supplies the city with a hip feel, which is then compounded with the town’s appreciation of a healthy lifestyle. It is full of vegetarian restaurants, so of course we stopped in one for lunch. What a treat! I had a field day at the health food store next door, though reminded myself constantly of the horrible exchange rate. We decided next to Cambridge and London, Norwich is where we would choose to live. It was charming and had more of a continental Europe feel–old buildings but new everything else (unlike the rest of England, which appears to be stuck in the 1940’s).
We’re still having foggy and frosty weather today, so I’m huddled indoors. The pregnancy is chugging along well. I have no complaints other than not sleeping well, which I’ve heard is preparation for the nighttime feedings to come. This weekend we are celebrating Nate’s birthday by having some friends over for dinner.