From our hotel room on our first night in Spain. He had played earlier in the day as well so we were able to enjoy lots of beautiful music.

Email ThisBlogThis!Share to TwitterShare to FacebookShare to PinterestLabels:Spain,Travel,Video

Having a great time!

Sorry I’m not able to post more yet. We’ve had some issues with the internet and now are almost out of batteries on the computer…can’t get the plug to work. Anyway, we hit Madrid on Friday and drove to Granada yesterday. We’re about to see the Alhambra, and then we’re off to Sevilla later today. It’s a blast! More soon.at5:57 AMNo comments:

Email ThisBlogThis!Share to TwitterShare to FacebookShare to PinterestLabels:Spain,Travel,UK

The strangest day in my life

I haven’t fully absorbed all of today’s events yet, but I’ll start with a small post and go from there. Baby steps. Whenever it’s been a month since I’ve written, whether it be an expectant email, a journal entry, or a blog post, I always have this growing sense of guilt that I have so much to write I don’t know where to begin.

This time let’s begin with my flight to London, which took place last night, or this morning, depending on your time zone. I’ve been up for about 36 hours at this point, so I’m beginning to lose track. Right now I am sitting in our hotel room while Nate relaxes on the bed–we just spent the day lazily wandering around London, my favorite activity here, and now we’re waiting for some friends to catch the train from Cambridge so we can go to dinner. But I’m getting ahead of myself.

While minding my own business on the flight from JFK to Heathrow, a very strange, intense, and sad thing happened. I had just finished the in-flight dinner (a weird occasion at midnight, but whatever) and was in the middle of watching “Revolution Road,” which could be a blog post in itself. (Apparently rambling and side notes are part of jet lag, so bear with me). The man 3 rows ahead of me, approximately 70 years old and who moments before had appeared to be sleeping, suddenly made the oddest, loudest snoring sounds I’ve ever heard. Quickly the passengers around him became anxious and some started to wonder aloud if he needed help. It must have only been 20 seconds but it felt like an eternity…I realized something was very wrong and jumped out of my seat to help. (I should mention, in yet another aside, that I was recertified in CPR and AED just last week, one of those amazing God/fate situations). The man’s wife seemed catatonic and was no help whatsoever. After asking him if he was ok and seeing he was completely unresponsive, I yelled for a doctor…moments before he began vomiting out of his nose. I not only found a doctor, but a cardiologist and nurse both came to help him, thank God! We got him on the floor and administered an AED and oxygen, which actually revived him for a bit. After moving him to the galley, we continued oxygen and he became very combative. I will leave the most gory details out, but the situation ended with him going into (apparently) cardiac arrest, at which time 4 of us took turns giving CPR for the 40 minutes it took us to land in St. John’s, Newfoundland.

The poor man most likely died, as we never got his heart out of A-fib the whole remainder of time. After the paramedics got him and his wife off the flight, we spent a few minutes on the ground at the airport and then whooshed away again to London, and that was that. The other passengers, as well as the captains, thanked the doctors and the few passengers who assisted him–the whole experience was an excellent display of the power of citizen response. Whoever said people freeze and panic in a stressful situation has been watching too many movies.

An experience like that certainly makes you take stock of your life, and I’m so glad to have a loving family and great friends, and I’m thankful to have my health and to be able to take this wonderful trip to Spain and Portugal. Tomorrow morning we fly to Madrid, and I will update the blog as often as I can. For now, I’ll end the post with a picture of happier times, from our stroll around London. My love and prayers go out to everyone that you stay healthy and safe! 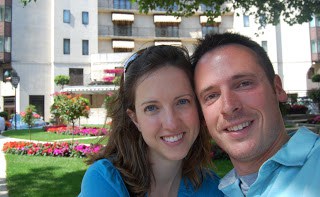