a family dinner by any other name

After graduating college, Nate and I embarked on a journey as a newly minted family, leaving behind our home state for adventures in the uncharted beyond. Moving away from our families of origin was exciting! Graduate school and moves to the Midwest, the US capital, and across the Atlantic Ocean opened our eyes to different and interesting ways of thinking and living.

Along the way, we became parents. Welcome to the best learning experience of all! While we were thrilled about our growing family, we also encountered our share of challenges and foibles. None of our friends had kids yet, so we navigated the choppy new waters solo while they smiled and did their best to understand the dark circles and panicked voices. Without family in town to assist us, we floundered quite a bit on just what to do with our new bundle of joy. We relied on our nanny to tell us what and when to feed Vivi. I chuckle to remember how we browsed stacks of parenting volumes promising new and different ways to achieve better results, as though she were a new iGadget instead of a person. 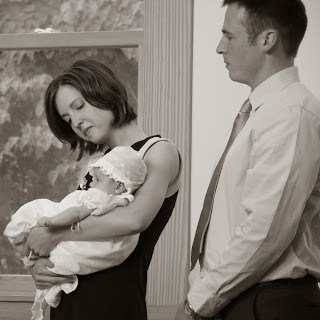 Although advice was still only a phone call away, the temptation of “the unknown better” beckoned louder. Eschewing family secrets for propaganda, we replaced the village with pop science. Whereas pride in continuing our families’ traditions was once the goal long ago, shiny-new-object syndrome stepped in and took over.

Unfortunately, our manic pursuit of novelty did not improve our lives. The promise that the latest parenting trend would solve our problems didn’t deliver. We were paralyzed by choice and growing dizzy from the pendulum of polarized philosophies. Put simply, we were not happy parents.

Email ThisBlogThis!Share to TwitterShare to FacebookShare to PinterestLabels:Babies,Challenge,Confession,Family,Heirloom,Parenting,Parties,Real Food,Simplicity,Toddlers,Urban Homestead 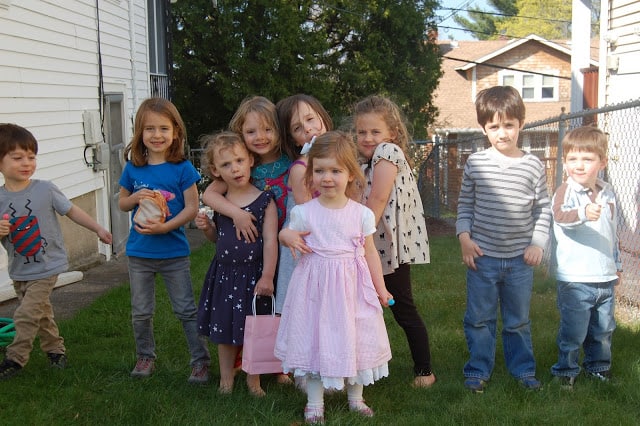 The little dears have finally moved away from the age when a group photo involves children standing higgledy piggledy and wizz wuzz all over the place to the age when they put their arms around each other and smile. Or pout, as it may be, but look at the camera all the same.

If you know me only through the blog and not in person, it is possible I have not communicated to you the extent to which my elder child ADORES having a birthday. This little human schemes and hatches her party plans year-round. Some days she wants a Batman rainbow unicorn cake, and some days she wants to go to a water park (dear God why), but the universal components are friends and food. I like that she understands the important aspects of party-planning and doesn’t get bogged down in details, which allows me lots of wiggle room.

For me, it is important that party-planning and execution be simple and relaxed. A core element of my personality is that I can’t be bothered to fuss when entertaining guests. Adding a secondary layer to my character onion, I think all the focus on children’s birthdays has become bananas, and I refuse to take part. The expense, the cheap plastic crap, the stress. What are we teaching our children? I won’t go into details since it’s a well-covered topic, but I will share my favorites of others who have covered it, e.g. UMN Birthdays without Pressure, a Boston Mamas article, and a Minimalist Parenting article

Thus, about three weeks before Vivi’s fifth birthday, I started running the potential itinerary by her, and darned if she didn’t accept all my ideas graciously and even enthusiastically, bless her. I enjoyed sharing her party last year (see my original post and/or when it was featured on Apartment Therapy), so I thought I’d share the party details again this year.

Going off our rule from years past, she was allowed to invite 5 friends, one per year of age (plus siblings. Poor Charlie had to endure a confusing moment when Vivi said “You don’t count at my birthday, Charlie.” Her pouty bottom lip will slay you). She has two best friends at school, so I cleared some possible dates with the moms ahead of time, figuring if they couldn’t be there, it wouldn’t be worth having a party at all. Really, this kid is a fiercely loyal friend.

I knew from last year that 2 hours was a good amount of party time and that we only needed one or two scheduled activities. A few months ago, her grandparents gave her and C tie-dyed t-shirts from their island vacation, and she was enamored with the dye process as I explained it from my summer camp days, so I knew we had settled on a good activity with tie-dying shirts.

Because we normally plan her party close to Cinco de Mayo (giving me a good excuse to serve my favorite snacks, salsa and guacamole), I mentioned to a friend we might get a piñata, and she told me about this great kind with ribbons the kids pull instead of beating it to death a la Steve Martin. Sold! 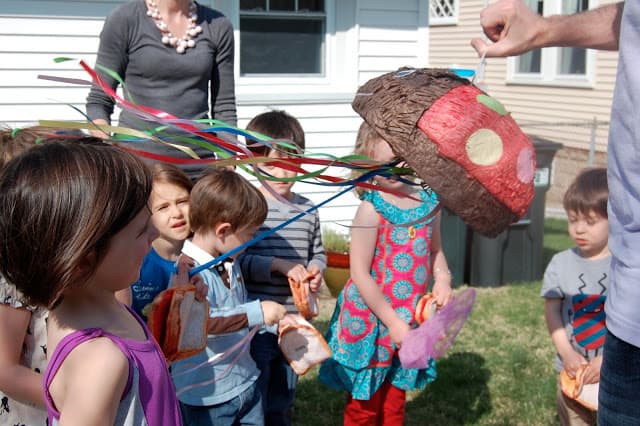 An activity we didn’t do that I still love the idea of is to get an old big white sheet for a picnic, and then when everyone’s done eating, give the kids fabric pens and let them draw on the sheet. What fun that would be!

On the morning of her party, I did a quick shopping trip to our local farm and Trader Joe’s to get everything except the avocados and kiwis, which I purchased a few days ahead to give them time to ripen. The kiwis are part of another birthday tradition I started with her last year, which is to buy her exotic fruit. She gets to watch it ripen all week, which just adds another layer to birthday excitement.

I got veggies and strawberries at the farm (a rare time for us to buy out of season). At TJ’s, I bought all of the other party stuff: that tray of four kinds of hummus, a bunch of various chips and salsas, and brownie bites and lemon squares. For refreshments, Nate got beer and hard cider (an elderflower type from Angry Orchard, so good), and I got a bunch of those fancy sparkling juices from TJ’s. The kids had a big serve-yourself juice container of watered down pink lemonade.

As for the dessert, we have noticed she doesn’t love birthday cake but obsessively craves ice cream, so I brought up the idea of an ice cream sundae bar. YES YES YES! I knew at that point we were all set. The kiwis and strawberries went into a bowl, and the brownie bites and lemon squares in another bowl, to serve alongside the ice cream sundaes. Thanks to my mom, who bought Vivi some cooking supplies at Christmas, we already had a bunch of fancy sprinkles to go on top. Oh, and I got the ice cream and mini cones in bulk at the supermarket for cheap a few weeks ago and stashed them in the basement chest freezer I love dearly. 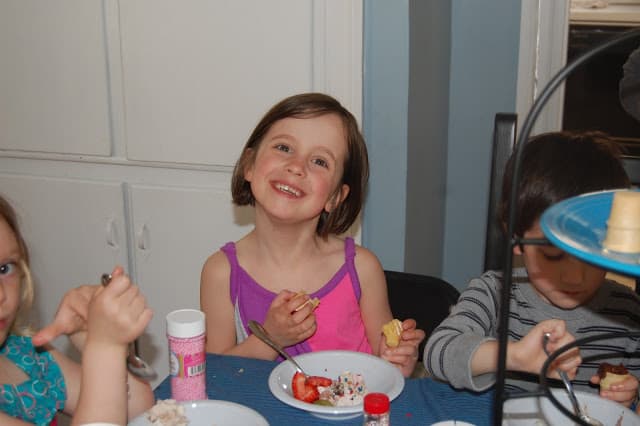 When the guests arrived, the kids ran around the backyard playing with our hastily purchased dollar store accoutrement, sidewalk chalk and butterfly nets. Watching them enjoy the unscheduled play time, I realized that even with short activities, I was still over-orchestrating the whole event. Next year I’m filling up the galvanized wash tub with water and bubbles and putting some tea pots and cups out there, and I have no doubt it will be enough. You should have seen them chase each other around the yard with those nets, trying to nab their friend’s heads instead of bugs. The parent crowd eyed each other, shrugged, and passed around more food and drinks. Three cheers for good friends! 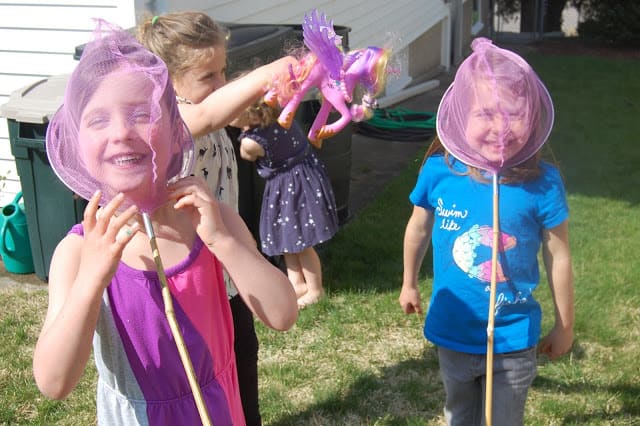 Here’s another party tip: have the right adults present. I had fretted over the possibility of Vivi getting a bunch of crap we don’t need for her gifts and pondered the idea of telling them not to bother (“Your presence is the present” kind of thing), but in the end I opted to let them make their own decisions, and it worked out perfectly! All the gifts she got were thoughtful and not what I would call a waste of resources. A fairy garden, a date to paint pottery, and some retro games like a Jacob’s ladder. As time goes on, I am more convinced that all I need to do to raise good kids is to surround myself with a good tribe. The rest of the details fall into place on their own, if I have the courage to let go. 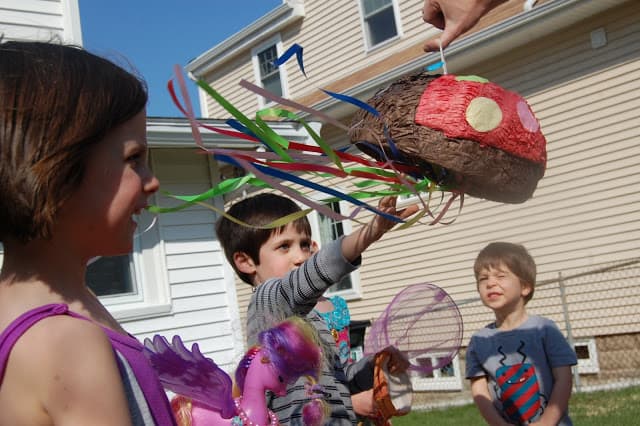 Tie dye was a bit of a mess. The kids were into it for about three minutes, until they realized the moms were doing most of the heavy lifting, and then they slowly wandered off. It was nice to be able to send everyone home with a t-shirt, but it wasn’t an expected addition so I wouldn’t do it again.

The ribbon piñata was fun in that it’s much easier and more civil to have the children take turns without having them blindfolded, dizzy, and swinging a heavy bat, but I will tell you that the ribbons did not make the dang thing open. In the end, Nate still had to do the Dad Maneuver (sans wood saw, fortunately) and rip it apart. 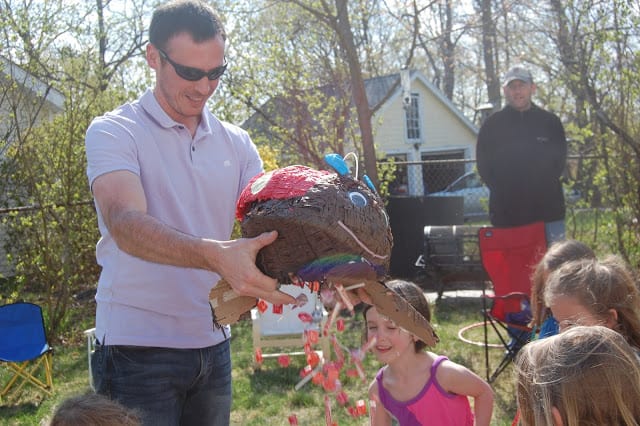 To my surprise, the kids didn’t dive in and elbow each other to get candy; they were all first-timers, so most stood there with dazed expressions, except for one girl who wisely grabbed a butterfly net and shoved it under the ladybug just in time to catch the spilled candy guts. I high-fived her mom for raising such a practical kid. My mom found these adorable peanut butter and jelly wallets on sale, so we let the kids put their piñata score in them, and I counted those and the tie-dye shirts as “goody bags.” 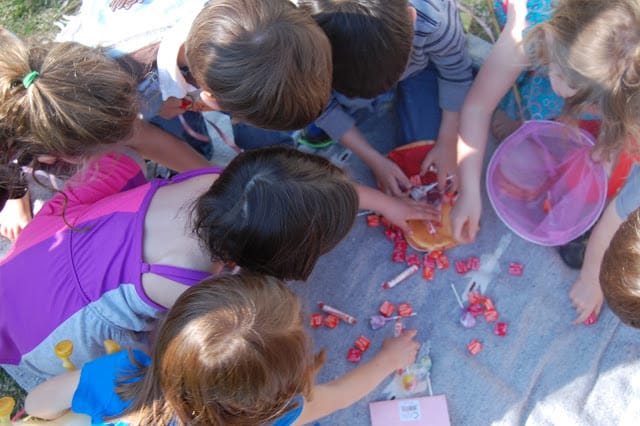 I’m repeating myself with this last party rule, but it’s worth saying again, as it is probably the most crucial element: invite a close friend of family member you can boss around, preferably of the female species. Of all the days I say “I wish I had a wife,” the day of a party is the day I most need a clone. Last year we had my friend Liza, who stepped in beautifully to pull off the Spiderman (and Spiderwoman!) cookie cakes. This year my mom agreed to come and help wrangle, and I couldn’t have done it without her. You want her and Liza on your party-planning team. Thanks Mom! 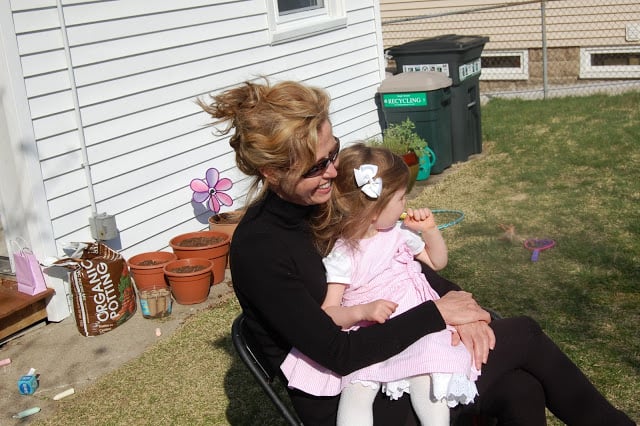