Updated 3/19: I forgot to tell you about my article that was published last week on Natural Parents Network, 5 Lessons My Kids Taught Me

If there’s one positive that comes out of being plunged in cold weather for so long, it’s that I’m motivated to try new indoor activities to clear out the doldrums. For the kids, this means new art projects like shamrock potato stamps. For us, this means new food and drinks to brighten our dreary days.

This week I spotted a big bunch of Meyer lemons–my first ever!–at the seconds table of our local farm stand, so I made bubbly marmalade and lemon syrup. I’ve been stirring the marmalade into my oatmeal and yogurt, and we tried out a new cocktail (recipe below) that received our highest rating: restaurant-worthy. On my first sip I decided it’s the perfect balance between a feminine and masculine drink, a little sweet but with a punch.
Read more »at9:33 PM3 comments:

On the RangeOctober 8 – 14, 2013
{On the Range} is my weekly series where I discuss what we’re doing, reading, and eating. It’s a little bit 52 project and other photo projects, and a little bit {Did you Read?} and {In the Ranger Kitchen}

going back to the well: a whiskey sour love story 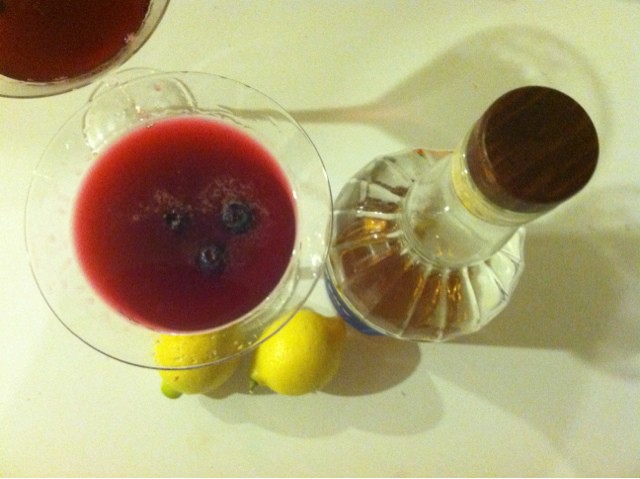 Call it having a more refined palate and lower inhibitions in our thirties, or being driven to it by our rug monkeys. Whatever the reason, we have slowly and somewhat accidentally inserted happy hour to our lives. It has sneaked its way into our routine to the point where when asked how often, I sheepishly tell my doctor that I’m a daily drinker.

Sheepish isn’t exactly the right word. To have guilt in this instance would mean I’d have to buy into the moral standard I am violating. Come to that, I couldn’t say “guilty” is a word I would use to describe myself in any way. I tend to think whatever I’m doing is the way to be, for better or worse. I am however academically interested in our culture’s guilt about alcohol. In that regard, Ken Burns did a great expose on Prohibition last year.

What do you think, friends? Except in the case of addiction, health, or other personal choice, is society-wide abstinence from alcohol a good thing or just another misguided attempt to control our pursuit of pleasure? Could the angst that accompanies the beverage be a feeling handed down from previous generations, like some sort of leftover teetotalist grandfather clock?

I have myself at times chosen sobriety for various reasons. When I graduated high school, a number of my friends gathered together for field parties, the sole purpose of which were to pursue drunkenness without being detected, in this case in the middle of a corn field. Is that a Georgia thing? Anyway, it didn’t take a genius to see that as teenagers, we made enough bad decisions when stone-cold sober, let alone illegally three sheets to the wind.

I maintained my abstinence off and on throughout college, figuring I had as much fun sober as I did drunk. I never really did much like sipping on gin and juice anyhow. Plus, when sober I could laugh at all my drunk friends and help everyone have a more safe experience. Like the time I prevented an apartment fire when my usually bright friends, now full to the brim with aqua vitae, made the not-so-brilliant decision to prepare bespoke flaming doctor peppers in a plastic solo cup. I chuckle to remember them fleeing the scene like a group of oversized toddlers running from a spilt cup of milk, only in this case the milk was a flaming river of Bacardi 151. Hee.

Through the jello shot and hunch punch years, I must say the idea of drinking alcohol just for enjoyment was a foreign one to me. Any beverage so disgusting as to need to be mixed with Hawaiian Punch to make it palatable must not be that good, or so I thought at the time. Possibly it was a product placement issue; did I mention I was drinking said beverage out of a bath tub?

When we moved to Wisconsin (and thus away from “hunch punch” and into “wop”…though we’ve also lived places where it’s called jungle juice and gin bucket), we discovered a culture unheard of in the South. College students could order beer from the STUDENT UNION, y’all. Similarly, one could purchase alcohol in giant quantities from the supermarket! Is that the craziest thing? Much like my stepmom setting out a candy bowl for her toddlers, I think they might have been onto something. Why vilify alcohol? It seems to me that calling the fruit forbidden just increases the odds people will abuse it.

Then there were the pregnant and breastfeeding years, and I must say abstaining from alcohol was only a small sacrifice to make when you consider the wealth of nonalcoholic cocktails out there (yay, mint limeade!). Of course, while living in England I did occasionally imbibe small amounts of low-alcohol drinks while pregnant with Vivi. I still swoon at the sight of a large can of Strongbow. Happily, Vivi seems to have made it through her stint in my belly with a hefty number of brain cells.

Over the past few years, Nate has become interested in craft beer, and I have enjoyed participating in his quest for the perfect beer. That quest has migrated in recent months into making cocktails. When we moved to Boston, I became hooked on dark ‘n stormies and felt content to sip on them for several years straight. I’m not known for my trendiness. But then we started watching Mad Men finally last month, and we are as into to that show as to our newfound fondness for the dark whiskey in Don Draper’s old fashioned.

[n.b.: Thanks to the Portlandia PSA, I won’t say I’m a nerd, but I do think it was pretty nerdy that I found myself, after typing the word “whiskey,” researching whether and when to spell it “whisky.”

One thing’s for certain; making cocktails is not a frugal venture. As with our decision to eat local food, we also prefer to support local booze-makers, who for the most part charge upwards of $35/bottle. I have no doubt their price is realistic and fair, but it takes a chunk out of an already pared-down entertainment budget. Speaking of money, we could really use a set of drinking glasses. Crate & Barrel to the rescue!

Right around the time we were considering the purchase of our first bottle of locally distilled American straight whiskey, I stumbled upon this article from The Kitchn about how to get started drinking whiskey. I took their advice and started with a whiskey sour, and I haven’t moved on down the list yet because I find it to be so tasty.

As for how to make your whiskey sour, I use the standard proportions of 2 oz. whiskey, 3/4 oz. lemon juice, 3/4 oz. simple syrup, and I sometimes also add a dash of grenadine to make it pretty. In the cocktails pictured, I used blueberry syrup in place of standard simple syrup (other times I use mint syrup). You can use basically any sweet liquid to sweeten your whiskey sour. I serve mine in a martini glass. I’m sure this fact classes me out of the big leagues in cocktail making, but I am blissfully unperturbed on this matter. 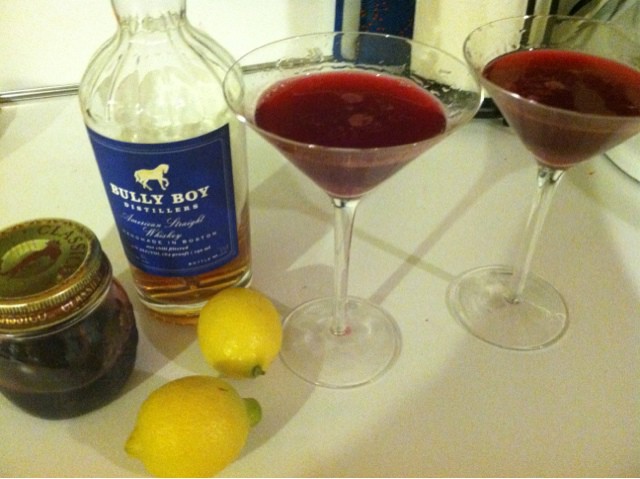 Email ThisBlogThis!Share to TwitterShare to FacebookShare to PinterestLabels:Cocktail,Locavore 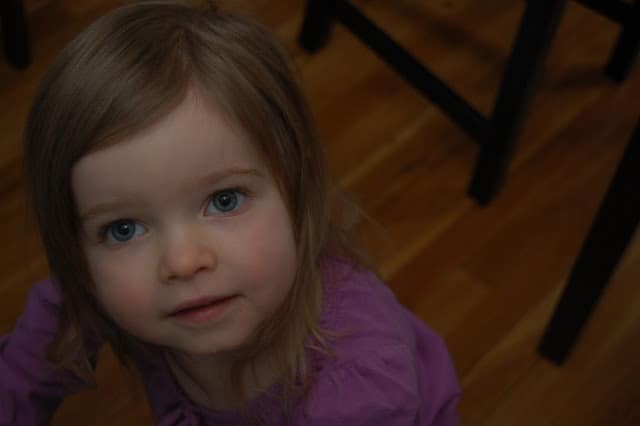 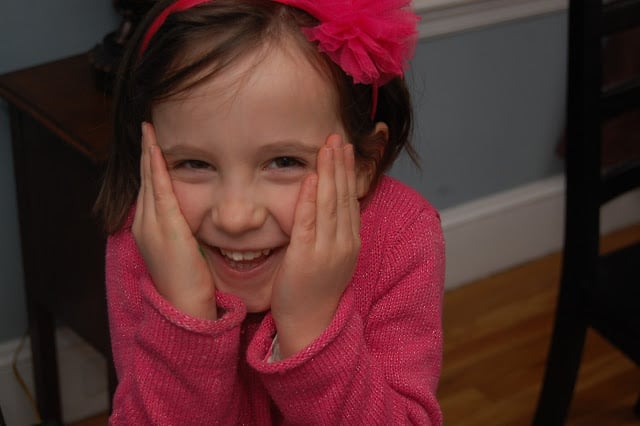